UPDATE: BIA Determines Eight Disenrolled From PALA Should be Re-instated

UPDATE: This is the determination that Pala Chairman Robert Smiths said was INVALID. He claimed the BIA spoke out of BOTH sided of their mouth, which most of us thinks is impossible, as the BIA usually has it's head up its.... uh, its head in the sand Great news today from the Bureau of Indian Affairs.  Although they have been sorely lacking at the Picayune Rancheria, they have come out with a recommedation for the Pala Band of Luiseno Indians.  Let's see how Robert Smith handles this situation.   They have been asked to give recommendations on the disenrollmentsof eight members of the Pala Band. 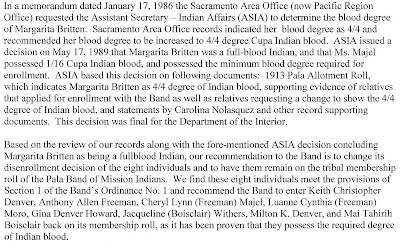 "OUR RECOMMENDATION is to change its disenrollment decision of the eight individuals and to have them remain on the tribal membership roll of the Pala Band of Mission Indians."   ...as it has been proven that they possess the required degree of Indian blood.
Posted by OPechanga at 11:30 AM

Smith and his cronies will likely hide behind sovereignty on this one and not abide by the ruling.

It would be a sure bet they would be using a ruling from the BIA if it wasn't in the disenrolled's favor though.

The B.I.A. actually did something. Now it’s see if they will enforce it or if Mr. Echohawk will not look at the evidence and overturns it.

Now, the BIA, a lower division of that department, is in direct conflict with this 1989 decision, by sidestepping the fact that the issue of Margarita Britten's bloodline is a closed issue.

I've seen IBIA decisions where the OFFICE OF HEARINGS AND APPEALS
INTERIOR BOARD OF INDIAN APPEALS(IBIA) firmly states when a decision is "FINAL" for the department, it shall remain final. So, does the BIA get to pick and choose which cases fall under "FINAL" and "FORMER FINAL, NOW OPEN FOR DISCUSSION?"

Why does the lower division BIA office not understand this? Is Amy Dutchske running interference for Robert Smith and her niece, Sara Dutchske (Setshwaelo), who is supposedly the attorney who is guiding the Pala tribe on the disenrollment matters? AMY, SOMETHING REALLY STINKS IN SACRAMENTO...AND IT'S COMING FROM YOUR DIRECTION!

Nonetheless, this is a good start, but the BIA Sacramento fell way short. It took 9 months to provide a 3 page "recommendation" when they should have simply backed up the 1989 Final Decision.

The sad thing is, Pala is just another broken link of the BIA's tattered and torn chain. The BIA Sacramento needs to stop pandering to the wealthy corrupt tribal leader and start addressing the needs of the indian peoples who are being crushed under the tyrannical rule of evil tribal leaders.

In the end, it is clear that the BIA does not listen to the cries of the indian peoples, they only hear the sound of "Cha-Ching" when the wealthy "Casino Indians/Executive Committees" come a-calling.

Yes why didn't they help your disenrolled?...this is not what California voters thought they would be getting from the tribes....and why are the tribes still allowed to have over 2,000 machines?...didn't they stop paying the State the tax after The tribe in San Diego refused to pay but still added the machines?...hpi have read all of the posts on this site and I am not tribal...but I will not gamble at Pechanga anymore....I wouldn't want the crime families to get my money....Basquez, Maisell, Macarro....how do these people sleep at nite?

Another matter to consider is the BIA complicity with Robert Smith in the disenrollment of 154 persons on Feb. 2, 2012. Robert Eben, Superintendent SoCal BIA, provided documents to Robert Smith that constitute a large portion of the so-called evidence he claims proves the 1989 Asbra decision was in error.

The General Council of the Tribe voted to change Margarita Brittain's blood degree on Feb. 2, 1984. This vote was appealed by Chairperson Patricia Nelson and other members of the Tribe. It was in response to that appeal that the Dept. of Interior made a final decision in Aug. 1989.

On Jun. 1, 2011, eight descendents of Margarita Brittain were disenrolled; the Executive Committee claims that they violated Sec. 6 of the Enrollment Ordinance in that they lied or misrepented facts that would have made them ineligble for enrollment. On Jul. 14, 2011, Robert Eben provided copies of the 1928 California Enrollment Applications for Vivian Banks, Esperanza Trujillo, and Delfreda Trujillo as per Robert Smith's request. He did so with full knowledge that the Executive Committee was going to proceed with further disenrollments, and even warned Robert Smith that these enrollment documents were for participation in a class action lawsuit, and not tribal enrollment documents.

One must wonder why a BIA administrator would work to undermine the Dept of Interior Final Decision. The warning did not address disenrollment at all, and so the conclusion must be that Robert Eben was complicit in the illegal disenrollments.

Also understand that the BIA provided all the documents that substantiated these persons blood degree. There was never any intent to deceive, or any action taken to violate the Enrollment Ordinance on the part of the disenrollees. It is a trumped up accusation that Robert Smith is ashamed to face the people with. All of Pala must hang its collective head in shame at the overt hatred of its cruel and despotic chairman.

Thanks for bringing this forward..

Robert Smith and the EC disenrolled the members also without giving any reason at all. He sent out a letter in October to members he was planning on disenrolling that said We are updating our rolls and your bloodline is in question please send the following Documents within 30 days. Which Those in question sent in within a timely manner and in addition to the documents they requested many more were sent to prove their bloodline. Never once did the letter ever say why it was in question. Months go by and nothing more was heard in this until the letter arrived in February. You are no longer a member of the pala band of mission Indians you are disenrolled. No reason, nothing saying what you sent in was not what we were looking for nothing. This is a total violation of our civil rights by not saying what the reason was, how they came to decision, why NOTHING!!!! No due process was offered in the appeal. How is it that you tell someone they have to turn in appeal to BIA, the BIA tells Pala they should reinstate the members because it has been determined their bloodline is correct then the EC chooses not to abide by what the BIA says. Why then would you have the disenrolled appeal to the BIA if you were not going to abide by what they say. You are violating your own constitution by not offering due process and you are violating their cil rights as afforded by the Indian civil rights act. It may take time but mark my word you will be seen as the terrible leader that you are and the members of the EC who stand behind you because they feel protected by doing so should beware he will take you down with him. Your wrongdoings are starting to surface And many are standing together now instead of apart and they will not stop fighting for what is right until it has been corrected. You may have the $$ but they have the passion to fight for their heritage, the time, and the truth in their side.

Not only do we have the passion to fight for our heritage, with time and truth on our side. We also no longer have to worry about the threat of disenrollment. They can't hurt us, but we can hurt them. A good leader might be able to salvage the situation, but a failure like Robert Smith will never be able to overcome the damage he has caused.

Now I don't have to worry about saying the first step is reinstatement, the second is restitution, after that we will fight to open up the financial records for a true independent audit and let the chips fall where they may. I know I am not guilty of any wrongdoing.

When that happens, or even as we close in on them, the Executive Committee might start trying to coverup their illegal activites, shred documents, flee from prosecution...I'm just saying.

It would be nice to a put GPS tracker on Robert Smith and see where he stashed away all the money he stole from us.

For all existing tribal members, be careful if you get disenrolled and you have children who had money in an account, you will not be able to find out where that money is, the EC will force you to have to get a lawyer to try and find that money. You should check on your children's funds now and demand a different way of having it deposited and saved.

Anonymous said...
The B.I.A. actually did something. Now it’s see if they will enforce it or if Mr. Echohawk will not look at the evidence and overturns it.

"Chickenhawk hasn't got a say anymore, remember that he "Jumped Ship!"..."Eagle Eyes."

The Sacramento BIA made a recommendation out of a higher authority's directive.

How dare the Sacramento BIA imply to the tribe that any part of that decision was a "recommendation."

The BIA should have told the Tribe "No new evidence has been presented since the Acting Assistant Secretary of 1989 made his final decision and gave his directive. We lack the power to overturn this in any sort of way. The decision stands."

Who helped write the Pala Enrollment Ordinance? Why was there no due process in accordance with the ICRA? And who approved that ordinance when it lacked protections for Tribal Members?

There are millions of dollars at stake with a Casino tribe. The BIA failed to protect true blood descendents by approving a governing document that fails to protect those descendents (that's ANYONE in the tribe) should the Executive Council/Enrollment Committee decide against them one day.

Again, no one is safe unless these elected officials are recalled or impeached.

Since this was before "Chickenhawk Jumped Ship," he obviously had no intention of addressing, or acting
on their recommendation while still in the position to do so....."Eagle Eyes."

The BiA needs to stand behind the 1989 final decision of the Secretary of Interior. They need to let Smith and the EC know that they ate violating the civil rights of the disenrolled as afforded by their constitution and the ICRA. They need to tell them that they need to reinstate all members or they will lose their federal funding. The BIA has the fiduciary duty to protect the disenrolled against the wrongfull termination. By not doing so the BIA is violating their rights as well. The tribe is not abiding by it's constitution and the BIA has the duty to make sure they do.

Where are the comments from smiths ass kissers?
Where are you lies ?

She was not!!!! She was probably adopted. MAYBE. They say she was a different color than the Original CUPA kids. She was of a lite skinned decent. That's what I know .

They say she was of lite decent. Are you serious that is all you have hearsay???( hearsay btw is usually not admissible in court because of what it is hearsay, he said she said crap) I have seen pictures of MB she is not of lite decent. I have seen all the documents that say who she was. If you can show proof she wasn't besides hearsay then I think you should speak until then it's probably best you just keep quiet your making yourself look ignorant.

Anonymous11:31 you know nothing. People spout off cuz they feel superior and end up in the dump soon after.