PALA WATCH: Who is Robert Smith, PALA's Current Chairman Is Bad to the bone 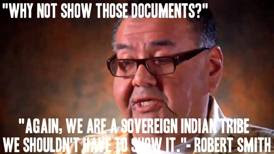 Pala's porcine "leader", Robert Smith is profiled by our friends at PALA WATCH follow their blog for information on the corruption.  He ranks behind the leadership of Chukchansi as one of the most corrupt.
The government and fools have chosen to refer to Robert Smith as Honorable. They do so even with the knowledge of his far-ranging criminal activities. They do this either because they are the beneficiaries of his ill-gotten gain or simply admirers of power without regard of it source.


Robert Smith is the grandson of Henry Smith, the son of a German Immigrant who homesteaded lands adjacent to the Mesa Grande Reservation. Henry Smith was a persistent German who pushed the BIA so hard that they finally gave him Indian status as being a quarter Indian from Mesa Grande. He married a Moro woman and had Robert Smith’s father, Victor Smith.

The Moro family was originally from Northern California. Adolpho Moro, who was half Wappo Indian and Spanish, moved to Warner Springs. Adolpho Moro’s real last name is unknown. The name Moro was confused by the census takers with the name Morio which was a prominent Cupeno family of the time. It is how the name Moro came to be in Warner Springs. Domingo Moro was Robert Smith’s other grandfather and who also was without any real ties to the Cupeno tribe.

There was a real confusion as to who the real Cupa people are.

READ The Rest at the PALA WATCH link

More bad news for Pala.
I heard today that Howard "HOWIE" Diaz is very sick and may not be here very much longer.
His Organs are shutting down.
He refuses to go to the Hospital and wants to spend his final days with his family and his friends so he is at home.
Please keep him and his family in your prayers.
Thank you.

Today Robert Smith was rushed by Ambulance to the Hospital for hard chest pains.
I was told that when the Fire dept was loading him the he told them that his chest was hurting real bad.
He should consider him self lucky because if i were the Ambulance driver i would have never taken it out of low gear.
We still would be on the freeway in route to the Hospital.

He probably just needed to fart.
With all of his health problems his time her on earth is very limited.
Maybe just maybe its about to expire.
He looks worse than an old dirty smudge pot.
I really think that his health is about to take him away from the earth and put him where he has made his own bed to rest on.
Burn in Hell you low life no good for nothing
son of a bitch.

Ambulance is just getting to Escondido,
but the driver can't remember where the Hospital is.
Hey your not the regular driver.
No sir i am not just wanted to make sure that this pig was dead before we got here.
That's what i would have said.
It only took 27 hours to get here.
Traffic is a bitch.
But the Hospital is only 27 miles from Pala.
Sorry but this patient is a no good asshole.
This is what i would have said to the ER staff.

Robert Harrison Smith is nothing but a low life little fat German Bastard.
He steals from the very people that he is supposed to protect.
He disenrolls for reasons that suit his fancy.
He lies so much that when you ask him his name he has to think real hard to give the right answer.
He tells so many lies that sooner or later he will forget which one goes where and then he will start his fall from the Chairman seat.
If anyone opposes his agenda he will have beat up or even KILLED by his crew that he pays extra to protect him.
He is a felon and should not be seating on any Tribal Government committee.
He is following his mothers pattern of taking what does not belong to him.
Its to bad that he didn't follow his fathers path of being a drunk because it would be easier to get rid of him or he would have died a long time ago.
But being a Mama's boy he he is nothing but a low life corrupt fat German bastard.
Even his own mother didn't want him as a little boy about 5 years old he was given to his aunt to raise him which was Kitty Morro
Trujillo.
Her and her husband Alvino Trujillo took him in and raised him as there own.
However he still took his mothers path of stealing money from the Pala people.
His mother was lucky that the Band didn't file Federal charges against her.
But the TRibe should file Federal charges against Robert Smith because he is nothing but a lying corrupt Murdering Mother fucker
( no pun intended).

This picture is of a real live " PIGGY BANK".
Every time he opens his mouth it cost the Pala Band Members Millions of Dollars.

Ii have seen the pala casino remain the same on the per cap for years now remain the same I have seen all the tribal members putting up with Roberts shit for a long time.ive also seen pechangs grow pala should be growing to he same way and I've mentioned it to some of my friends to hey we're like we don't know what's going on.well Robert has given each one of his kids a million a piece. I don't see any other tribal members getting a million.

Just a quick post before i go to work.
It's the same way for Nieto and her kids also.
How do you think that Nieto's daughter gets away with having a man that has been evicted from Pala Reservation living with her in a Tribal built home on Tribal land.
It's because her mother is in control of the Tribe and the tribes finances.
Some criminals living in Pala have more power than real Tribal members do.

@ 4:27 AM
His cheeks are stuffed with hundreds of lie to be told when questions are asked.

Rob's daughters still drive around in vehicles that were bought with Tribal funds and free insurance under the Bands insurance blanket policy but no one cares.
Rob also has so many things that belong to the Tribe that are of value stored in his big ass building at his home including a couple of Harley motorcycles that used to be at the Casino to give as prizes for certain slot machines.
Plus a roon that has been built inside the building that is kept under lock and key and no one is allowed in there.
It has a big gun safe in it also that is more than likely used to store some of the stolen money he has taken from the Casino.
That way he has no paper trail concerning any money taken from the Casino and other Tribal
ventures.
I wish someone would burn that son of a bitch down or break into it and steal a his shit.
The FBI won't get a search warrant to search it so it's fair game.

You Pala members need to quit complaining about your Stupid Fat (none Indian) German Chairmen. Get off your fat asses and clean up the mess you created. Get a Backbone Speak Up, or is it true and all members signed your own rights away to let your Council do your voting? Squeeze that Ugly Fat Ass in the Jet he bought with your Fucking cash and fly him back to Germany.. Make sure you Shove all his Cronies and Kids in the Jet with him. He is a Thief and should be fed to the PIGS! That's my comment...STAND THE FUCK UP FOR YOUR RIGHTS!! Before your all dis-inheritated!!!