any news media and  types are out with comments like "If you support Trump, you support RACISM!  It has me asking, if you don't STAND AGAINST the moral stains created by disenrolling tribes, does that mean YOU SUPPORT ABUSES of Civil and Human RIGHTS?!

For over a DECADE, we've written to our State's Senators (Barbara Boxer , Feinstein and most recently Harris ), local Representatives and at least THREE U.S. Attorney Generals (Holder,  Lynch, and most recently Jeff Sessions)   Crickets chirping is the usual response.  And the entertainers, yes we wrote to many, asking them not to perform at an APARTHEID reservation, including George Lopez and Gabriel Iglesias, who we sent more than 50 faxes.  Not a response.  Does this mean they approve of civil rights abuses?

The Redding Rancheria Tribe announced that they will be continuing with the placement of the Win-River Casino at Strawberry Fields in Redding during Tuesday's city council meeting.

"We are the original people and we have suffered enough," said Redding Rancheria Tribal Chairman Jack Potter Jr. at the meeting.

OP: Are you FUCKING KIDDING me, YOU ASSHOLE? You have allowed the family of YOUR FIRST CHAIRMAN after restoration, to SUFFER 15 YEARS of disenrollment and DEATH without Justice.

Proving that it's more important to coddle a DEMOCRAT, than it is to be honest about her actions, prominent Natives, including Deb Haaland, a Laguna Pueblo citizen, dismissing the actions of Natives who still harbor resentment to Elizabeth Warren appropriation of Cherokee Heritage.
Rep. Haaland, who endorsed Ms. Warren last month, takes a different view than those critics. Introducing Ms. Warren at the forum, she noted that some in the news media had asked her  whether Mr. Trump’s criticism of Ms. Warren over her ancestry would “hamper her ability to convey a clear campaign message.”    OP:  SO??

The allegations in the indictment were breathtaking: three former officials of the tribe that runs the Rolling Hills Casino had embezzled $6 million and used the money to buy lavish homes, cars and gold coins and for travel overseas.

The allegations laid out in 2017 in a 69-count indictment and an earlier federal civil suit claimed the three had gone on a “12-year looting spree” and used the money to buy tickets to World Series, Final Four and NBA games and charter private jets and then lied to federal agents investigating the conspiracy.

All three defendants – including one who was a former FBI agent in Sacramento – denied the charges and were headed for trial next month in federal court in Sacramento.

Prominent Dems Who Support APARTHEID at Pechanga By Accepting Their Money

IF DEMOCRATS REALLY ARE THE PARTY of Civil Rights, why don't they WALK IT LIKE THEY TALK IT?

It's becoming apparent that naming names is what's needed.  Any politician that accepts donations from Pechanga or ANY tribe that disenrolls their people in the manner of Pechanga, Redding, Chukchansi and Nooksack is complicit and endorses the APARTHEID and Civil and Human Rights Violations those tribes practice.

Similar to Joaquin Castro publishing donor names to Donald Trump, exposing them as haters. For those that agree with that tactic, here are prominent Democrats, including Presidential Candidates Kamala Harris and  Amy Klobuchar, who are A-OK with the Apartheid, Segregation, Civil and Human Rights abuses from the Pechanga Band of Luiseno Indians of Temecula, led by Mark Macarro and his lobbyist wife.
From OPEN SECRETS 2018 cycle

Posted by OPechanga at 6:30 PM No comments:

If only the reason was because the Redding Rancheria violated the civil and human rights of the family of the tribe's first chairman after the tribe was restored, Robert Foreman.   If they cheat their OWN PEOPLE, we can believe they will cheat their customers and the city/county.

The Redding City Council unanimously voted on Monday evening in a special meeting to send a formal letter stating their concerns and expressing opposition about the proposed location for the Win River Expansion Project.
The motion for a formal letter was made by Mayor Julie Winter to have two city council members write the letter and review it with city staff before bringing it back to the full council for a final review before sending it to the Redding Rancheria and the Bureau of Indian Affairs (BIA) who will be the ones deciding if the project moves forward. The two council members drafting the formal letter are Erin Resnor, Mayor Pro Tempore and Michael Dacquisto.

Despite many that supported, a significant amount of people also spoke against the expansion project for reasons including traffic concerns, environmental concerns, no benefit for the city, higher volume of calls for emergency services, taking away from local businesses in Redding - among other things.

Read more »
Posted by OPechanga at 2:42 PM No comments:

Los Angeles Rams Partner with Apartheid, Segregation Tribe, Pechanga Which Abused their Own Elders and Children


Turning a blind eye to the human and civil rights abuses including Apartheid and Segregation, (as well as trapping rightful members in a phony moratorium) by the Mark Macarro led Pechanga Band of Luiseno Indians, the NFL Los Angeles Rams football team and Pechanga Resort Casino have announced a one-year partnership that makes Pechanga the official Indian casino of the sports franchise. The partnership will cross-promote the two entities and bring new philanthropic events to Southern California, according to a statement from Pechanga.

“The Los Angeles Rams represent such a storied franchise,” said Jared Munoa, president of Pechanga Development Corp. and whose OWN FAMILY is kept from the tribal membership rolls. “We are thrilled to join forces with a team that brought a Super Bowl run back to Los Angeles and has made such a deep commitment to the broader Southern California community.
“This partnership will help us provide exclusive VIP experiences for our Pechanga guests while also engaging fans before, during and after games.”


Jason Griffiths, Rams VP of Partnerships added, “Pechanga shares our commitment to give back to our neighbors and we are looking forward to developing meaningful programs with them to inspire Angelenos to shine bright. We are excited to welcome Pechanga to our family of partners and to work with them to enhance game days for our fans.”
The one-year agreement gives Pechanga access to premium in-stadium seating areas during games at the L.A. Memorial Coliseum; the ability to develop a variety of VIP events with the team; a halftime presenting sponsor; and a media presence in the Rams’ radio and television channels before and after games.

The MORAL Bankruptcy of NARF, NCAI and NIGA Which are ALL Missing In Action on Dismemberment Of Native Americans

Professor David Wilkins, who has written extensively on disenrollment, calls out Native American organizations that we've written about who've buried their heads in the sand to avoid the topic of Indians abused by their own tribes.  If these "interest" groups don't stand up against disenrollment of thousands of Native Americans, that means they are FOR IT, right?


Here is an open letter to the leaders of the National Congress of American Indians (NCAI), Native American Rights Fund (NARF), and National Indian Gaming Association (NIGA):
Dear Native Leaders,
Each of your organizations, founded at critical moments in native history–NCAI in 1944, NARF in 1970, and NIGA in 1985– have and continue to play vital roles in the political, legal, and economic development of Native nations. I write you all now to request that you continue to remain vital and relevant by taking an unequivocal stand against spurious disenrollment practices that destroy the human and civil rights of individual native citizens and threaten the sovereign powers of all Native nations.

What is the CHUKCHANSI WORD for CHUTZPAH? Bear Spray using Tribe To Hold Seminar on Violence

We may never know if they keep disenrolling their language speakers before they walk on.   The Chukchansi tribe, which used bear spray and burning logs on their elders, will hold a  seminar on "VIOLENCE is NOT OUR CULTURE"!    My friend Cathy Cory says:    Tribal disenrollment is the worst kind of domestic violence and lateral violence against one's own kin. The furthering of generational trauma to self-decimate one's people beneath the guise of self-determination and the abuse of sovereignty to the detriment of all our native community

From 2014
Sounds cultural, right?  But these people draw the limit at wife beating? 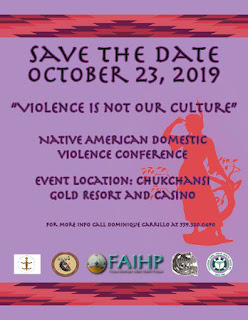 Posted by OPechanga at 2:35 PM No comments: