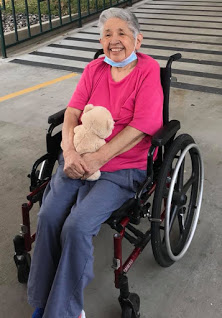 Matilda Smith, the eldest surviving great granddaughter of original Pechanga allottee, Paulina Hunter, has walked on at 91. She was my late father Felipe Cuevas' last surviving sibling.  Matilda attended school throughout the Great Depression & graduated from Roosevelt High School in 1947. She enlisted in the United States Air Force in 1950 where she trained for and became a cryptographer for Central Intelligence. While stationed in Murfreesboro, TN, she met and married the love if her life, Frank Smith on March 3, 1952 .

I wrote this tribute in September 2020

HAPPY Birthday to my aunt

Hearing that there are SHOTS FIRED at the Redding Rancheria.

It sounds like it is JUST passed the Win River casino.  The word is the CASINO IS SHUT Down for safety
Stay Tuned.

Cousin Michael Madariaga has a petition up on CHANGE.ORG
requesting the removal of Pechanga Tribal Chairman Mark Macarro, civil and human rights abuser from his advisory position with the California Native American Heritage Commission  WILL you SIGN it for all who have been abused by disenrollment?

Read more »
Posted by OPechanga at 4:37 PM No comments:

Pechanga Casino News Report: Thousands of Native Americans are being OUSTED from tribes by Disenrollment WITHOUT A TRIBE

Colleen Williams of KNBC Los Angeles fronted this FEBRUARY 2007 story of Pechanga Casino Tribe's Disenrollment, which is the STRIPPING of Tribal Citizenship, in this case, the Hunter Family, who had more documentation, than ANY other tribal family.  The Pechanga Resort & Casino has helped many in the tribe, and hurt many others. #stopdisenrollment


In the opening, Pechanga Chairman Mark Macarro, sets up a strawman argument, which we beat down with facts here