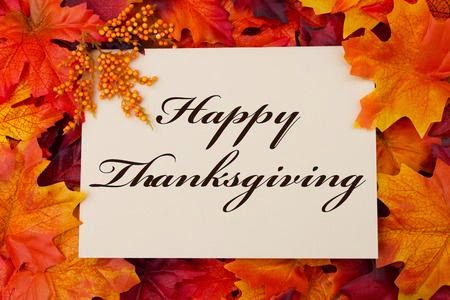 This day is a day of thanks, no matter what happened in history, it's NOT about PILGRIMS.

A day to be thankful for your family, for those things in life that have made us better.

I'm thankful for those who continue to fight for justice for Native Americans that have been harmed by their tribes. Each one of you that remains in the fight, are helping those who have given up, or lost interest.

Emilio Reyes, who has been working tirelessly for years on forcing the Bureau of Indian Affairs to be transparent on their complicity in tribal disenrollment, has won his latest skirmish.   You can read about his battles here and their attempts at the okie doke here

BIA must provide me 2,100 pages related to tribal disenrollment and waive a $300 fee because CA BIA has finally acknowledged me as a Representative of the News and Media.  Cccording to other BIA Agencies I have been categorized as a Rep. of the News and Media. CA BIA was the only Dept. Of Interior Agency challenging my requester category.

Catching them in their subterfuge leads them to try any tactic to get out of providing the truth about the THOUSANDS of Indians they helped corrupt tribal leaders like Mark Macarro remove from tribes.

WELL DONE, my friend, well done. Amy Dutschke won't be happy.  And readers, remember this:
YOU WON'T WIN A FIGHT,if you aren't in the game

Repost from 2010, for those who don't know the story:
Hunter cousin A'amokat has put together some historical facts on the Disenrollment of Paulina Hunter to answer a frequent "drive-by" commenter that smoothly says we couldn't prove our ancestry.  Yet, we have more evidence than ANY other family currently enrolled in Pechanga.  And people want to boycott Arizona for civil rights violations?  Try Pechanga.

Our critic from the tribe says we never answer what he considers tough questions but we have done so many times but since he just pops in and runs, I will tackle those issues once again for all to see.

1. “Dear Reader, that the mouthpieces for the Hunter clan never address the fact that their declared ancestor, Paulina Walla Hunter, had no available birth record.”

While it is true we couldn’t find a birth record for our ancestor Paulina Hunter, she is not alone in this regard as Dr. John Johnson from the Museum of Natural History in Santa Barbara, Ca, commissioned by the enrollment committee to research the ancestry of Paulina Hunter, said in his report to the committee, “The original books of baptisms, marriages, and burials for Mission San Luis Rey have been lost for more than 150 years which hinders many Luiseno families in their search for documentary evidence pertaining to their ancestors.”

So a lot of today’s Pechanga tribal members also don‘t have birth records for their ancestors who were born during the period after the surviving San Luis Rey padrones (census records), which were recorded between 1811 to 1835. So the only thing this proves is that Paulina Hunter was in the same boat as a lot of other tribal members from the historical period.

2. “Or the fact that while the historical record lists the parents of PWH, nobody knows their ancestry.”
While Paulina Hunter’s maiden name is listed as Walla in some records Dr. Johnson in his report on her ancestry indentifies her family name as being Quasicac and that the man who was almost certainly her father, Mateo, was the only Indian listed in the pardrones as being born at the place known as Pechanga over 75 years before the Pechanga reservation was even created! Also the records indicate that her maternal grandmother, Restituta Quenix, was from the from the original Temecula Indian village.
So how can we explain the discrepancy of last names from one generation to another generation?
Again Dr. Johnson elaborates in his report to the enrollment committee on the ancestry of Paulina Hunter:
“Many Indian families of this period (the 1800’s) were adopting the use of surnames, as was the Euro-American custom. The church records show that there was considerable experimentation with surname use by all former Mission Indians. A variety of surnames would be used, even within the same family, before one version was finally chosen that continued to be used as an inherited family name.”

So again the Hunters are in the same boat as a lot of other Pechanga families in proving with 100 percent certainty by today’s modern standards that their ancestors from previous generations, who often also had different last names from one generation to the next, are indeed their ancestors.

3. “Or the uncomfortable fact that the Bureau of Indian Affairs has no Certificate of Degree of Indian Blood on file for PWH, meaning the BIA never tracked PWH as an Indian.”

If the BIA never recognized Paulina Hunter as a Pechanga Indian or even an Indian at all, then why do Hunter family members have CDIB cards that say Pechanga and why didn’t the enrollment committee make it an issue during the Hunter’s disenrollments?
One would think that if, as our esteemed critic from the tribe tries to imply, that if we the Hunters weren’t even Native Americans that the committee would have stated this was the case. After all, a slim majority of the committee, as we have shown here on this blog many times, was biased against us and I am sure they would have jumped at the chance to try to even further discredit us.

In fact the enrollment committee in its Record of Decision against the Hunters of March 16, 2006 stated:
“Nothing in the Committee’s findings shall be construed or interpreted that the Committee is making a determination of the Indian or Native American status of Paulina Hunter or her descendants.”
Also, in addition to the fact that the Hunters do have CDIBs, Hunter family members who have gone through probate for their share of the Hunter family allotment have official probate documents from the United States Department of the Interior that name their loved ones as “deceased Luiseno Mission (Pechanga Band) Indians” including those who have gone through probate after the Hunter family disenrollment.
So clearly the United States government still considers us Pechanga Indians even if the tribe officially at this time does not.

4. “Hunter clan tried to bring politics to bear on the disenrollment process, to stop its proper function of removing non-members from the membership roll. This effort failed. The process went forward. Doing its duty, the enrollment committee disenrolled the Hunter clan, returning it to its true status as non-members.”

The Hunters played politics with the process? Nothing could be further from the truth as it was our opponents who played politics with the process by perverting the process by going against the wishes of the people.
Because on July 17, 2005 the general membership of the tribe, the final authority in all matters of tribal government and business of the Band under Article VIII of the Band’s constitution and bylaws, voted to outlaw disenrollment and to strike from the books the disenrollment procedures. This law stated that as of the justification date of the petition of the new law, June 19, 2005, that all tribal members in the Band would remain tribal members and could not be disenrolled. So the disenrollment of the Hunters on March 16, 2006 was clearly illegal. By the way, the Hunter family were not the ones who presented the petition to outlaw disenrollment to the people so no, we were not playing politics with the process.

And I haven’t even scratched the surface by showing here once again how the evidence was very much in our favor but instead of what our opponent would have you believe, the list goes on and on in our favor not the other way around.
Posted by OPechanga at 8:14 PM No comments:


The Southern Sierra Miwuk Nation has been waiting 37 years for a decision from the U.S. government about their petition for federal acknowledgment as a Native American tribe.

The California tribe with historic ties to Yosemite National Park and surrounding areas received bad news a year ago indicating a final decision denying them federal recognition could be near. A proposed finding with this recommendation was issued, looking at just one part of one of seven criteria, defining the tribe’s modern community.

It’s an unexpected finding, and an unexpectedly brief 25-page response, for the tribe which has submitted thousands of documents and endured decades of back-and-forth with the Office of Federal Acknowledgment.

A public comment period is underway. The deadline for submitting letters is
Nov. 18.

The City of Temecula is perfectly fine with their tribal neighbor, The Pechanga Band of Luiseno Indians, a tribe that has violated the rights of their tribal citizens, their ancestors and re-wrote the tribal history to fit a narrative, while practices apartheid and segregation on their reservation.  Hey, if those values are okay with the Rams and the Lakers....?

As we celebrate Native American Heritage Month in November, join us for Pechanga Pu'??ska Mountain Day, Friday, Nov. 15, 2019, at 11:30 a.m. at City Hall, in the Conference Center, as we honor the history and heritage of the Pechanga Tribe. 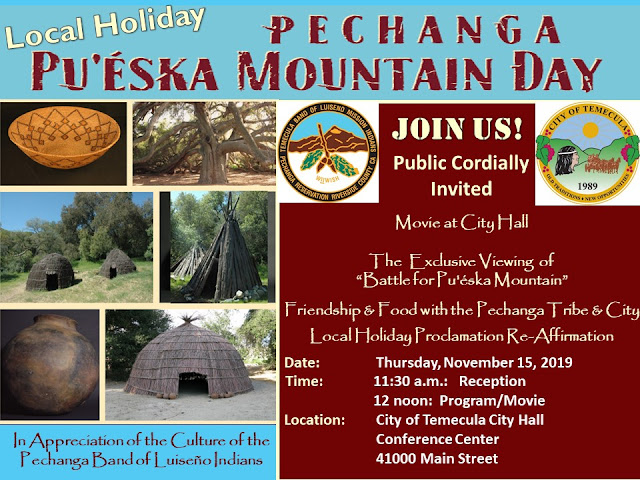 Should we have an annual Pechanga disenrollment parade on this day..that's part of Pechanga's history and heritage.

Posted by OPechanga at 1:08 PM No comments: 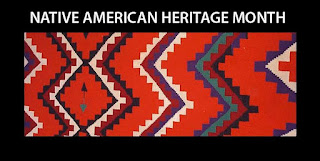 Re-postThis month-long holiday is a time to celebrate rich and diverse cultures, traditions, and histories and to pay homage to the important and numerous contributions of Native American people throughout the centuries.

Left unsaid is the issue of over 11,000 Native Americans who suffered the abuse of tribal disenrollment, moratoriums and banishment  at the hand of their own tribes.  This holiday month presents the PERFECT opportunity for tribes to restore their people to their rightful place in the tribe, to bring all the people home.

Read more »
Posted by OPechanga at 2:17 PM No comments:

We told you Mark Macarro isn't good for you Kamala, just endorse fake Native American Elizabeth Warren or Quid Pro No Biden and start angling to be surrogate-in-chief of the eventual loser.

HEADED OUT THE DOOR??

Kamala Harris is cutting DOZENS of staffers in New Hampshire, how long can she hold on when she's not earning any money?

She lay down with the dog of Pechanga.  And getting fleas.  See ya Kamala

ANOTHER YEAR of SILENCE on the #StopDisenrollment Issue this year of the 76th Annual Marketplace in Albuquerque NM.  This year is at least the 15th year of refusal to acknowledge the abuse of Natives BY Natives

For years, we have reported that the National Congress of American Indians has stood by in silence, while over 10,000 American Indians have had their civil and human rights abused by Tribes who have disenrolled their people.
Related Links:   NCAI Silent over a Decade  and NCAI, NIGC and NARF MIA on Dismemberment

Read more »
Posted by OPechanga at 6:08 PM No comments:

Tribal Disenrollments Are "Like Being Raped,Then Going to the RAPIST for Justice"

A news story on tribal disenrollments and moratoriums had the perfect quote as a post title, from Carla Maslin, from the Redding Rancheria of Northern California. 400 Pechanga People know exactly what she means, having been "raped" of their citizenship, benefits and security by Pechanga Chairman Mark Macarro, the enrollment committee led by Bobbi LeMere and certain members of the Tribal Council, Russell "Butch" Murphy and Andrew Masiel among them.

From that article:
Tribal membership disputes are also a problem across the country, with as many as 4,000 tribe members fighting for enrollment, said Carla Maslin, a disenrolled member of the Redding Rancheria in Northern California and an advocate for disenfranchised tribe members.
Maslin's case has gone nowhere in tribal court, she said. "It's like being raped and going to the person who raped you for justice," Maslin said.