Are Pretendians The Reason for Spike in Native Population?

Interesting article at RedState on why the huge leap in the Native American population. The author seems to believe pretendians are the reason.  I think that’s too simplistic

Well, it’s not likely that more Native Americans are entering the U.S. right? So, there has to be another explanation.

But, according to Sturm, this increase is occurring because “individuals who previously identified as white are now claiming to be Native American.”

The author refers to this phenomenon by what she calls “racial shifting.”

But what is interesting is that the author points out that those choosing to identify as Native American are trying to move further from “whiteness.” The author says that in her 14 years of researching this issue and interviewing “dozens of race-shifters” for her book, “Becoming Indian,” she “learned that while some of these people have strong evidence of Native American ancestry, others do not.”


Christmas 2020 marks the 17th Christmas without a tribe for many Pechanga Band of Luiseno Indians descendants, including young children, now, not so young, and the newly born will only be able to hear about their heritage in oral history, since the Pechanga tribe erased their history, via disenrollment, which is the stripping of tribal citizenship.

Mark Macarro, Andrew Masiel, Frances Miranda, Bobbi LeMere and the tribal council CAUSED our children and our elders to suffer for their greed and to hide their subterfuge.

It's NEVER too late to open your hearts and for the  council to DO THE RIGHT thing for the Holidays. 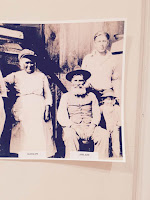 The San Pasquale case we have documented, Alegre v is OVER.  SUMMARY JUDGMENT in favor of the United States  Attorney for the plaintiffs Alexandra McIntosh was determined, and spent years on the case, only to lose because there were time limitations and this case was a decade too late.  Sad for the Jose Juan Descendants, and a victory for white interlopers.

Alegre v US has details from last year.

Plaintiffs next contend that if the Court finds they filed their complaint beyond the six-year statute of limitations, that the Court should apply the doctrine of equitable tolling. (Doc. No. 186 at 14.) However, Plaintiffs did not diligently pursue their rights or show that extraordinary circumstances prevented them from doing so. Although Plaintiffs assert “the non-San Pasqual Trask descendants mandate all Tribal Government meetings be closed to all people, except Federally Recognized Tribal members” and “the BIA would not meet with the San Pasqual descendants who are not Federally Recognized Tribal members,” (id. at 15), Plaintiffs have failed to make any showing that attempts were made to pursue their rights. Equitable tolling is therefore not appropriate. See Kwai Fun Wong v. Beebe, 732 F.3d 1030, 1052 (9th Cir. 2013) (the party seeking equitable tolling must establish: “(1) that [it] has been pursuing [its] rights diligently, and (2) that some extraordinary circumstances stood in [its] way.” (internal quotation marks omitted)), aff’d sub nom, United States v. Kwai Fun Wong, 575 U.S. 402 (2015).

Based on the foregoing, the Court finds Plaintiffs’ APA claims barred by the statute of limitations.

Nooksack Tribe of Washington DEPRAVED INDIFFERENCE To Their 306 Elders. Evictions For Christmas

I am still recovering from Covid 19, but seeing this on attorney Gabe Galanda’s twitter, got my blood boiling.  Years of elder abuse of the Nooksack 306 is coming to a head with evictions scheduled DESPITE the HUD protestation.  Sadly, deathly silence from Washington’s two Senators Patty Murray and Maria Cantwell.

Galanda: Despite a 2nd @HUDgov request to Nooksack to halt evictions pending @USIndianAffairs investigation of ICRA violations, tribal politicians refuse. They sent cops to @nooksack206 homes twice since getting this letter. 12/28 is the first slated eviction. 3 days after Christmas

These are @HUDgov- & @WSHFC-backed Low Income Tax Credit homes, which our clients have leased to own for as many as 23 years. They enjoy home equity, if not own the units outright. But they are being evicted without due process or access to counsel, in violation of federal law. 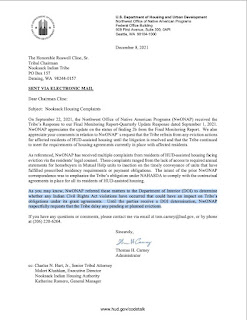 The Nooksack 306 struggles have been documented here on this site since the beginning.At this late date, only a fliurry I’d your support could make a difference.  Spotlight is the best disinfectant.

Posted by OPechanga at 7:35 AM No comments:

Covid strikes Original Pechanga Will Be Back After Recovery

Sorry to my loyal readers. After a cross country move, my wife and I have contracted COVID.

WE ARE recovering and hope to be acini action next week. We had been vaccinated, pretty good at following masking rules. The little virus found us.  Please help keep the blog out there, by rereading some posts and sharing them on social media so others can find us.