San Manuel Tribe Donates $250,000. Pechanga, who stole Hundreds of Millions from Members Watch from the Sidelines

James Ramos, chairman fo the San Manuel Band of Serrano Mission Indians, will present a a check for $250,000 to Priscilla's Helping Hands, a community outreach program, Friday in the PHH offices on Date Street in San Bernardino. The Pechanga Tribe of Temecula, led my Mark Macarro, which has stolen over $200 MILLION from rightful members, keep that kind of loot for themselves.

Priscilla's Helping Hands addresses the immediate needs of families for food, clothing and shelter, then works to set out a path to self sufficiency through adult education and social services for families living within San Bernardino and neighboring communities.

It is part of San Manuel's ongoing efforts to recognize smaller, lesser known community based organizations responsible for making a positive impact in the community, Ramos said.

"Our support of Priscilla's Helping Hands reflects our intent to reach out to groups that have their roots in San Bernardino and are often the first place families turn in times of need," Ramos said in a news release.

PHH was established in 1995 as part of the outreach efforts of Ecclesia Christian Fellowship in response to the expressed needs of underserved populations of San Bernardino. The organization provides aid to residents in Highland, Redlands, Colton, Rialto and San Bernardino.

We at Original Pechanga's Blog applaud the San Manuel tribe for their charitable work. We ask readers to tell their friends that Pechanga cheats their own people, so they should support a tribe, like San Manuel that opens their hearts and pocketbooks.
Posted by OPechanga at 6:52 PM 4 comments:

Benjamin Masiel , Masiel Crime family member, out on PAROLE, was arrested AGAIN by the Riverside County Sheriffs Department. YOU WILL NOT find that he is a PECHANGA MEMBER making well over $300,000 per year in the Press Enterprise.

Hemet man was arrested after he ran from a car during a traffic stop and authorities discovered he had threatened the driver, according to a news release from the Riverside County Sheriff’s Department.

Joshua Farley (apparently ALSO a Masiel Crime Family member) from Hemet was booked on suspicion of criminal threats, possession of a controlled substance, violation of probation and obstructing an officer in the performance of his/her duties, the news release said. He also had an outstanding felony arrest warrant for domestic violence and was taken to the Southwest Detention Center.

According to the news release, officers attempted to make a traffic stop on Pechanga Road and Pechanga Parkway and the passenger immediately exited the vehicle and ran from the deputies. The driver of the vehicle told deputies that the fleeing suspect threatened to shoot him if he stopped for the police, the news release said. A short foot pursuit followed which entered the north perimeter of the Pechanga Reservation, where deputies initially lost sight of the suspect in a heavily wooded area. A perimeter was set around the area where the suspect was last seen.

With the assistance of the Pechanga Tribal Rangers, Sheriff’s Department helicopter, police dogs from Hemet and Murrieta, Farley was located a short distance into the reservation.

During the course of this investigation a second incident took place, the news release said.

While assisting the Sheriff’s Department in securing a perimeter around the initial fleeing suspect, Tribal Rangers observed another vehicle driving erratically towards the southern perimeter. Tribal Rangers attempted stop this vehicle and it fled from them, driving off-road towards the location where the initial foot pursuit took place while the suspect was still hiding from deputies.

The second vehicle was not able to traverse the open field and subsequently stopped. Sheriff’s deputies and Tribal Rangers eventually arrested Benjamin Maciel, the driver of the car. He was booked into the Southwest Detention Center on suspicion of a violation of parole, and obstructing an officer in the performance of his/her duties. Joshua Farley and Benjamin Maciel are related to each other.

See FULL STORY HERE and MORE on the Masiel CRIME family HERE
Posted by OPechanga at 10:19 AM 10 comments:

As if the shootings/killings at Soboba weren't enough to ruin their image?

The Press Enterprise, which ALWAYS is happy to report Soboba transgressions on the front page, but RELUCTANT to criticize Pechanga at ALL, says the latest indictment/ARREST of Robert Salgado Jr hurts their image!

Ya THINK? Now, if Salgado will cheat the U.S. by not paying taxes on his BRIBERY, which he did over FIVE YEARS.... Do you NOT THINK he would LIE to the government about acquiring more LAND... for FREE?

What does it take to ruin Pechanga's image we ask?
1. Terminations of the family on whose property their casino sits on?
2. Keeping rightful members out via an unconstitutional moratorium?
3. Terminating a second family even AFTER their own hired expert PROVED they were Pechanga?
4. Lying to Congress to acquire SACRED land that they put a golf course on? How SACRED!
5. Not following tribal law
6. Taking the word of an imprisoned CHILD MOLESTER, while required notarized affadavits and certified copies from those terminated.
7. Stripping ELDERS Health Care.. MORE on MACARROCARE later
8. Violently removing CHILDREN from the tribal school.
9, Crimes like carjacking at Pechanga and general thuggery that closed Silk.

Thank you PE, for picking on the Sobobas and not covering Pechanga
Posted by OPechanga at 9:49 AM 3 comments:

Why The Pechanga Tribe of Temecula Deserves YOUR MORAL OUTRAGE

and certainly should not be enriched by your hard earned dollars.

Drive by the casino to another property and keep the thugs of Pechanga from profiting from destroying families. The Tribe has VIOLATED the civil rights and human rights of 25% of it's people, that's equivalent of 8 MILLION Californians in terms of population. UPDATE: It's EASY to avoid the equivilency whey it's only a few HUNDRED people, but that's what it equates to. Too MANY people who rightfully belong have NEVER shared in the prosperity that Pechanga leads you to believe is available to Pechanga People.

Over the course of the past few years, those of us who have been disenrolled, which was told in KNBC's Without a Tribe in Feb. 2007 and in quite a few articles including A Paper Trail of Tears, in Harpers, and numerous stories in local papers including Pechanga's Expert Contradicts Tribe, have been trying to get the story of Pechanga's despicable actions into the mainstream. Many are being kept from their rightful place in the tribe, via unconstitutional actions of the tribal council (Pechanga's Constitution)

Pechanga, whose leader is Mark Macarro, of Colton High School, (NOT BORN in Poverty on the Rez) now on the DNC's platform committee, (which shows the DNC's lack of concern over the civil rights and ICRA violations) has become the place for scoundrels. It's important that the people exercise good judgement and avoid a tribal enterprise that is corrupt. Recently indicted Tribal Chairman Robert Salgado of Soboba is a hero of Macarro.

Please spread the word by sending this blog address to your friends and family:

Your help in increasing traffic will ensure that our voices are heard. It's a small request, one that can be done from the comfort of your desks. We have a new Speaker of the House in California and we hope for more support for civil rights from Karen Bass. At worst, Pechanga will have to spend more money to grease the palm of another politician. We've already forced them to spend $50 MILLION more than the other tribes to ensure their proposition passed. They had NO confidence that their bad acts would not count against them. AND, if we had more voices, that most probably would have been true.

Thank you from the family of Paulina Hunter and Pablo Apis and the Tosobals.
Posted by OPechanga at 6:45 PM 23 comments:

The CPP of Pechanga is looking to cement their people in the tribe, including the man who once tribe to splinter the tribe, Butch Murphy, who was adopted into the tribe. He is not Pechanga blood, yet, this petition below, will have his family name on the Pechanga Base Roll. It will EXCLUDE the name of Paulina Hunter, who, in SWORN testimony taken in the Luiseno language was proven Pechanga. Pechanga's own hired expert, Dr. John Johnson, proved Paulina Hunter was Pechanga, yet, her descendents, including those who STILL live on the reservation, were terminated.

And people think Wal-Mart is bad?

Pechanga Petition for History
Posted by OPechanga at 2:10 PM 61 comments:

Pechanga Tribe Will Re-Write it's History to Erase Tribal Members

Pechanga of Temecula is looking to rewrite history, eliminating historical band members from their rolls. Paulina Hunter was proven Pechanga by the band's own hired expert, yet her family is terminated and now, the eraser is out. 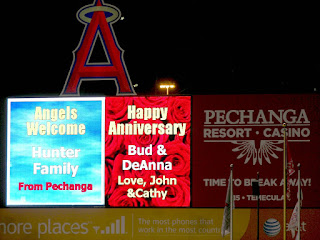 The Hunter Family from Pechanga were WELCOMED by the Los Angeles Angels. Unfortunately, the Pechanga Band has terminated them from the tribe. Shameful
Posted by OPechanga at 4:03 PM 7 comments:

.
Gov. Arnold Schwarzenegger has added his voice to those opposing the annexation of 54 acres to the Soboba Indian Reservation for construction of casino/hotel/retail complex.

In a letter to Bureau of Indian Affairs Regional Director Dale Morris, Schwarzenegger said that the proposal violates his policy regarding annexing property in urbanized areas to reservations for casino construction, and that the draft environmental impact statement fails to address important issues that would arise from construction of the complex.

Five U.S. senators have also signed a letter opposing transferring land to reservations for casino construction, including both of California’s senators, Barbara Boxer and Diane Feinstein.

The signers also include Senate Majority Leader Harry Reid and John Ensign of Nevada and Jon Kyl of Arizona.

Their letter to Interior Secretary Ken Salazar pointed out that the department’s own policies require that added weight be given to such considerations as revenue loss to local jurisdictions and compatibility with existing uses and land-use policies.

The factors cited in the letter specifically refer to existing residential land use.
Posted by OPechanga at 4:50 PM 1 comment: