Is Bob Kelly running a protection racket at Nooksack?
MONEY QUOTE:
If the Nooksack Court of Appeals orders are simply ignored by the Tribe's government officials, the Nooksack government ceases to operate under the rule of law and as a result it forfeits it's claim to equal status with other sovereign tribes any right to demand other jurisdictions respect Nooksack Tribal Court orders or that other sovereign governments deal with it government to government and it's legal authority to govern the Tribe.

In Re Gabriel Galanda v Nooksack Tribal Court Order on Motion to Enforce Contempt Order
Posted by OPechanga at 9:55 AM 3 comments:


The key points of the case start with the tribe having burden of proof that the Lowe brothers, Stolpan, their cousin, and the Ammann siblings were erroneously enrolled by the previous tribal council.

That enrollment action took place on Aug. 5, 2013, and is the centerpiece for much of the case. The petitioners’ names included on that enrollment resolution were approved by the council 5-0, according to meeting minutes and tribal government documents.

“The overwhelming evidence from the people who were at that hearing was that there was a clear intent on the part of those five council members to enroll those individuals,” said Paiement.

Frank stated that calling the case an issue of disenrollment was inaccurate in that they would have to have been legal members of the tribe first in order to be disenrolled.
“The tribe’s issue from the beginning is that these people did not become legal members,” said Frank. According to Frank, the tribe’s focus is on making sure the law and procedures of the tribe are followed, in this case the laws and procedures of tribal enrollment.

Frank pointed out that documents to support the requirement of at least half St. Croix Indian blood were lacking for all the petitioners. However, both the Ammanns and the Lowes testified that there is no reason or evidence to prove they should not be enrolled in the tribe. Frank also called into account the adult moratorium in place for the tribe which makes any adult ineligible for enrollment.

This, he stated, should have barred any adult from entering the tribe. Paiement contended that the vote by the tribal council to enroll the adults in 2013 was a repeal of that moratorium. Both parties did agree on the point of asking the court to consider the credibility of the witnesses for both parties carefully.

Posted by OPechanga at 5:38 PM No comments:

Just days after the justice at Enterprise Rancheria, a tribe that restored membership to many disenrolled over a decade ago, it seems like the leadership of the Picayune Rancheria of Chukchansi Indians are using tribal disenrollment as their personal plaything.

Word coming from Chuckchansi is that some more disenrollment letters went out.

The faction that is made of distributees received letters of disenrollment. This faction is being called "a tribe" by John Peebles and the 7 Tribal Council members. This was the Wyatt-Ramirez clan I believe who at one time wanted only their group to make up the tribe. (KARMA?)

Congratulations to the Enterprise Rancheria for finding it in their hearts to DO THE RIGHT THING.  It's not difficult.

Thirteen years after disenrolling 73 tribal members, in a move that was orchestrated and illegal in 2003,  the Tribe sent letters of appeal for potential membership in the tribe.  25 disenrolled members applied for reinstatement.

Each member was individually interviewed by the General Council.  A VOTE of the tribe was taken and ALL 25 were returned to the tribe.

Many of our disenrolled,  chose not to appeal to return to the tribe.  Mainly because the same tribal leaders who orchestrated theirr disenrollment are still in leadership positions.

Still to be determined:  Elders that have passed since disenrollment could receive their memberships back posthumously.  UPDATE: It has been reported that those who have passed HAVE been restored to the tribe.

Let's hope this HUGE step in both ATONEMENT and RECONCILIATIONS will inspire other tribes to do right by their people.  Honor the ancestors and bring ALL THE PEOPLE HOME.

Congratulations to the Enterprise Rancheria, for restoring HONOR and Dignity to their people


Prominent Indian lobbyist Holly Cook Macarro has raised $431,000 for Democratic presidential candidate Hillary Clinton, The Washington Post reports.
As a bundler, Macarro was one of the lobbyists who raised the most money for the Hillary Victory Fund, the paper reported. The fund is a joint effort of Clinton's campaign and the Democratic National Committee.
Macarro is a member of the Red Lake Nation who worked at the White House during the Bill Clinton administration. She is now a partner at Ietan Consulting, an Indian law, lobbying and policy firm.
Macarro is married to Mark Macarro, once the subject of a recall attempt, the chairman of the Pechanga Band of Luiseno Indians. Macarro, along with a felon were recently re-elected to the Tribal Council.

NOOKSACK GENERAL COUNCIL: WE are the TRIBAL LAW, NOT Corrupt Council

Last Real Indians has a good news story, so far, of the General Council of the Nooksack Tribe standing up for their TRIBE, against the corrupt actions of a few council members.


Because the holdover Tribal Council refused to convene an election for four Tribal Council seats that was constitutionally required by March 19, 2016, and overthrew the Court before the election was about to be judicially compelled, the General Council convened the meeting and held its own election.

The new Councilpersons will soon be sworn in before the remaining four Councilpersons: Bob Kelly, Chairman, Nadene Zapata, Secretary, Carmen Tageant, Councilperson (whose recall from office by the holdover Tribal Council, the General Council also invalidated), and Bob Solomon, Councilperson.

Attendance was high despite now-former Councilperson Katherine Canete, who also serves as the Tribe’s General Manager, having sent an email out to all Nooksack employees just hours before the meeting, threatening any employee who attended the meeting with the loss of their job. 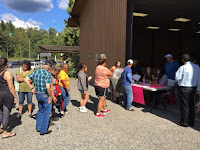 The meeting was held beyond Nooksack tribal lands, at the Deming Logging Show facility, to avoid interference or arrest by the Tribal Police, whose chief has failed to uphold tribal law in taking a court clerk to jail for violating

Read the rest of the story at: Last Real Indians

Two Orange County residents suspected of drug-related crimes were arrested Saturday, July 16, at the Pechanga Resort and Casino in Temecula.


Rudy Torres and Karina Melgoa, both residents of Santa Ana, are being held at the Southwest Detention Center on suspicion of possession of a controlled substance, a Riverside County Sheriff’s Department news release states.

At 5:24 a.m., (Nothing good happens after midnight?) deputies responded to the casino, located in the 45000 block of Pechanga Parkway, in response to reports of drug activity at a vehicle inside the parking structure.

During a preliminary search, deputies found a large amount of methamphetamine and heroin in Torres’ clothes, the release states.

A subsequent search of the vehicle uncovered 183 grams (6 oz.) of methamphetamine and various drug contraband.

Those Pala people that have had their citizenship STRIPPED by the corrupt Robert Smith have NOT given up.  This time, their fight is AGAIST THE BIA, for FAILURE to do their Fiduciary Duty.

Thanks to Indianz.com for linking to my blog

We posted last month about the loss at the 9th circuit. In reading the case from our layman's position, it seemed CLEAR the appeals court took the easy road to dismiss the case.

They didn't even see that it was the Federal government's trust responsibility to Natives to protect their rights.

Thank you to all of you who had sent me election results. We appreciate having the results.

Looks like Corrina Sanchez is out of a job and a huge payday. 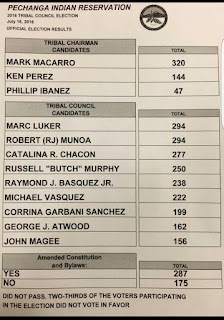 UPDATE! NOOKSACK People to Hold Meeting to TAKE BACK THEIR TRIBE from Kelly Faction's Corruption

After months of Bob Kelly and some council members maintaining positions PAST their expiration date, it appears the NOOKSACK people are working to TAKE BACK THEIR TRIBE.   We've written about the corruption of the Bob Kelly Faction....now, it looks like tribal citizens are at the end of their rope,  From a Facebook post.   THIS EFFORT has NOTHING TO DO With the Nooksack 306 issue.


Dear Nooksack People,
By now you have heard rumors that there is going to be an Emergency General Council Meeting on July 14th at the Deming Logging Show. The rumor is true. Please attend! The time is NOW! The plan is to discuss holding an election to fill the 4 seats for Vice Chairman, Treasurer, and the 2 councilman positions.
We want to hear from you--the people. You are the VOICE! This ex-councils position was to listen to the voice of the people. The people are the ones who VOTED them in. The people are the ones with the POWER to vote them out.


A record $2.88M arbitration award was issued June 22, 2016, by a retired judge following a slip and fall incident by a schoolteacher resulting in loss of ability to work due to a concussion with vertigo and nausea. It is the only case to proceed to binding arbitration against the Pechanga Casino and the largest verdict in the state’s history against the Pechanga Indian Reservation under the Pechanga Tort Liability Act.Attorney Eric Traut represented the claimant to its conclusion after coming on as lead counsel only four months prior to the five-day arbitration.

Affirming the district court’s summary judgment in favor of the defendants, the panel held that the Bureau of Indian Affairs  did  not  act  arbitrarily  and  capriciously  when  it concluded that, according to tribal law, it had no authority to intervene in a tribal membership dispute, in which more than 150 people were disenrolled from the Pala Band of Mission Indians

In reaching our decision, we recognize with regret that Plaintiffs  will  suffer  severe  and  significant  consequencesfrom  losing  their  membership  in  the  Pala  Band.  It  is  also plausible  that  Plaintiffs  were  disenrolled  unjustly,  or  in  a manner  not  in  accordance  with  tribal  law.  But  the  AS-IAaptly  noted  that  “in  the  exercise  of  sovereignty  and  self-governance, tribes have the right, like other governments, to make  good  decisions,  bad  decisions,  and  decisions  with which others may disagree.” The federal government does not interfere  in  those  decisions  in  the  absence  of  specific authority to do so PALA Tribe Disenrolls over 150 Family Members - Britten Family Ousted

The National Indian Education Association has this up on their website:

NIEA will offer a free Convention App to all attendees thanks to the generous sponsorship of the Pechanga Band of Luiseno Indians Tribal Council.

Pechanga has an Apartheid system of segregation and  descendents of the HUNTER family were escorted OFF Tribal school property after disenrolling their parents.  Here is my cousin Akeva McKeaver explaining how Pechanga Tribal Rangers forcefully removed her children from school.

Former Calipatria police chief and Pechanga tribal council member Ken Perez is on the ballot, challenging the corrupt Pechanga Band of Luiseno Indians chairman Mark Macarro , who was once the subject of a recall petition.

It will be interesting to see the vote totals pitting an honest man, vs. Macarro. 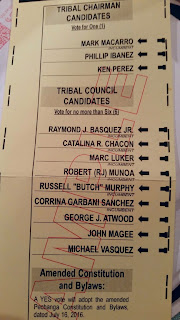 It is also a chance for the tribe to eject felon Raymond Basquez Jr. from their council and restore some dignity.