Disenrollment Demands Serious Attention from ALL SOVEREIGN NATIONS, Including the Federal Government

Attorney Ryan Seelau had an essay in Indian Country Today  in 2013 on the issue of the harmful action of tribal disenrollment foisted upon thousands of Native Americans by their own tribes.  How much has changed? Graton Rancheria has ended disenrollments, Enterprise Rancheria and the Robinson Rancheria have brought people home where they belong.   Still, 11,000 are without justice, and tribal people are either unwilling or afraid to DO THE RIGHT THING.......what is the answer?

Before I go any further, let me be very clear about something.

Support FEDERAL RECOGNITION for the NEWE TONGVA NATION. Gabrielino was erroneously omitted from the list of entities eligible to receive services 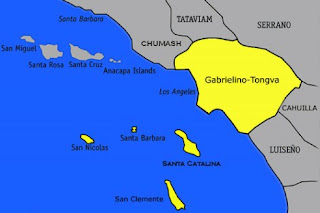 The Tribe is not requesting review under the acknowledgement process at 25 C.F.R. Part 83 because the Tribe was and continues to be federally recognized. Gabrielino was erroneously omitted from the list of entities eligible to receive services from the BIA brownshirts in error.

Barbara Murphy, Architect of the Redding Rancheria's Disenrollment of the FOREMAN FAMILY, WALKS ON


Barbara Murphy, a former chairwoman and respected elder of the Redding Rancheria, passed away on May 8. She was 79.  May her soul find the peace that in life, she ripped away from Bob Foreman and his family, via disenrollment

Murphy served as chairwoman for several years and as chief executive officer of the tribe for 16 years, according to a tribal press release.

Murphy also was a reminder of a darker era in federal policy. As the last living survivor of the termination era, she was one of the 17 original distributees who helped keep the community together after the United States ended its government-to-government relationship with the tribe.

Darker STILL was the fact that she was a leader in the movement to disenroll the family of the tribe's FIRST Chairman, Robert Foreman  whose story we tell often.

It's not honorable to disrespect the dead. but it's also dishonorable to not tell the truth about what happened.......

RIP Barbara Murphy, may nobody EVER ask to dig up your body, like you had Virginia Timmon's remains exhumed for a DNA test, and then disregarded the information......

RIPPING CHILDREN from their Parents is NOT a New Phenomenon. Native Children were STOLEN and FORCED to ATTEND BOARDING SCHOOLS

In the news is the stories of children of illegal immigrants being "RIPPED" from their families by Donald Trump.  Missing from those news stories is that his predecessor Barack Obama ripped thousands of children from their parents too.

This past week, we learned how WOEFULLY IGNORANT many of California's Senate Candidates are about Native American Issues.


Interesting project from AC that I found on Facebook, he's kindly given permission to post.  He reached out to a number of candidates for U.S. Senator in California's upcoming primary election. Here is what some of them had to say about the government-to-government relationship between Indian tribes and the United States, of which CALIFORNIA has 109:

New Nooksack Chairman: 306 should QUIT fighting for THEIR RIGHTS, THEY Ain't GONNA GET THEM

As far as I’m concerned, the battle with the 306 is now over,” said the Nooksack’s new chairman, speaking of the hundreds of people the tribe considers disenrolled. He now plans to get them to “move along,” even as they continue fighting and making startling allegations.

Council members stopped holding public meetings. The previous chairman was nowhere to be seen. And he could feel the tension as he walked around tribal neighborhoods east of Bellingham.


“You’re afraid to say hi. You don’t know who’s your enemy.”  (how about LOOKING IN THE FREAKING MIRROR, Mr. New Chairman, SAME as the OLD CHAIRMAN....


The reason for all this is the long-running fight in this tiny tribe of roughly 2,000 over whether some 300 members should be kicked out. The tribal government’s attempt to do so became a symbol of tribal disenrollment nationwide and unraveled in such a tumultuous and legally suspect way that federal and state authorities paused millions of dollars in funding.


Posted by OPechanga at 4:41 PM No comments: 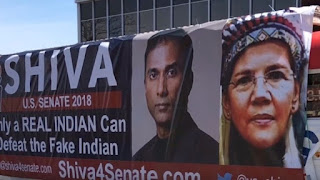 TOO GOOD NOT TO POST the only thing missing is another democrat calling Shiva a (red dot Indian, not a whoo whoo Indian) :

A self-described "real Indian" who is running against Mass. Democratic Sen. Elizabeth Warren is suing after city officials demanded he take down his signs calling her a "fake Indian."

The upstart independent Senate challenger, Shiva Ayyadurai, on Sunday filed a federal lawsuit alleging that the demand from the city of Cambridge violates his constitutional free speech rights, according to The Washington Times.

Since March 17, Ayyadurai's campaign bus has sported two identical signs picturing himself and a rendition of Warren wearing Indian attire. Emblazoned next to the images are the words: "Only a REAL INDIAN Can Defeat the Fake Indian."


The bus has reportedly been stationed in a parking lot in front of an office building owned by Ayyadurai, who faces exceptionally long odds, for more than a month -- just a mile from Warren's home.
Posted by OPechanga at 10:14 AM 4 comments: