President Biden, After A String of FAILURES, Gets On the Right Track Restoring the Tribal Nations Summit 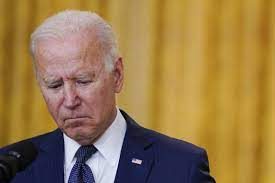 President Biden is a huge failure, but on this, he gets it right.   Acee Agoyo has the full story at Indianz.com

As promised by the Biden administration, the White House Tribal Nations Summit is returning after a four-year absence.

UPDATE: Media Rushes to Air WHITE WOMAN IN JEOPARDY STORY in Gabby Petito Case. MMIWG GET NOTHING IN COMPARISON .

FIRST, Let me say, I pray that Gabby Petito's body is found soon and the perpetrator is brought to justice (yeah, we know who did it)

My next wish is that our INDIGENOUS Mothers, Sisters, Daughters, Aunties abductions and murders would get the same news coverage.

Please read articles on the differences in press  coverage linked in this story.

Why are white women valued so much by our media over others?  Is it deliberate racism? Or simply ingrained that women of color are worth less?

The comments are open
UPDATE:  FBI announces they have found a body in WY consistent with what they know of Gabby.  PRESSURE works.  Again, I wish they would put this kind of pressure for all our #MMIW who deserve justice, and to be found.  FBI STATEMENT

STOP DISENROLLMENT VIDEO: "ELDERS are SACRED" Unless Your Tribal Council is CORRUPT

POWERFUL video from the ancestors of Virginia Timmons and Lorena Butler of the Redding Rancheria and her children, including Leon, Lorena, Leland and Bob and two additional generations.

Posted by OPechanga at 9:40 PM No comments:

Sovereign Immunity is NOT Immunity from Condemnation or Sanctions.
Disenrolled Redding Rancheria Native American activist Cam Foreman, who has been instrumental in getting Secretary of the Interior Deb Haaland on record with disenrollment has this petition on CHANGE.ORG (link fixed) that is building steam.  YOU can help with that by signing the petition and asking your friends and family to sign as well.


For nearly 20 Years, over 90 Native American Tribal Nations, most exclusively Tribes with Casinos, have abused & hid behind Sovereign Immunity to violate the Indian Civil Rights Act.

Also Article 9 of the UN Declaration on the Rights of Indigenous Peoples, violate heir own Tribal Constitutions, Treaties. including their Responsibility & Obligation to Protect the Rights of Their Citizens by orchestrating conspiracies to Disenroll & Banish over 10,000 of their Tribal Citizens.

PLEASE SIGN the petition at the Change.org link above.


Posted by OPechanga at 5:30 PM No comments:

We wrote about Maxine Water's efforts last month and it's coming closer to fruition.

"This is a fight that's about fairness and equality," Rep. Maxine Waters, chairwoman of the House Committee on Financial Services, said at the hearing. "For one minority group to discriminate against another minority group cannot stand. And as chair of this committee, I don't intend for it to stand." 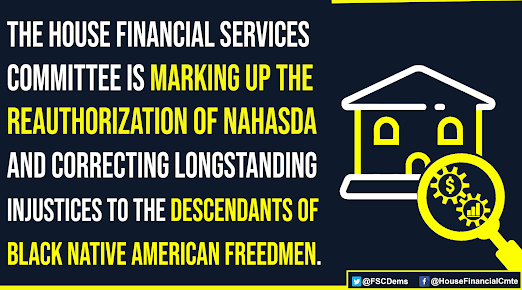 FIRST LOOK FROM TWITTER!
Under the leadership of Chairwoman @RepMaxineWaters
,
@FSCDems are marking up the reauthorization of #NAHASDA and correcting the historic disenfranchisement of descendants of Black Native American Freedmen. This applies to all FIVE civilized tribes.

Posted by OPechanga at 7:20 PM No comments:

My friend Marilyn Vann, who fought for JUSTICE for disenrolled descendants of Cherokee slaves (FREEDMEN) is honored by a nomination to serve her tribe.

A special shout out to my friend Marilyn Vann who made history tonight as, I believe, the first Cherokee citizen of Freedmen descent to serve in a Cherokee Nation government post in our modern history, perhaps ever. An engineer by profession with an impressive professional resume of government service, she is highly qualified to join the Cherokee Nation Environmental Protection Commission. It was a great honor to nominate her and to watch her confirmation at tonight’s council meeting.

She is a perfect choice for the Cherokee Nation, a TRUE WARRIOR
Posted by OPechanga at 11:25 PM No comments:

While other tribes like Pala and Pechanga deny their children their heritage through disenrollment,  the Morongo Band of Mission Indians and four other tribes from across the nation have joined the federal government in petitioning the U.S. Supreme Court to uphold a law that gives adoption preference for American Indian children in state foster care to American Indian families.

In a petition filed Sept. 3, the tribes are essentially requesting that the high court leave intact the Indian Child Welfare Act, a law enacted in 1978 amid a trend that saw an “alarmingly high percentage” of American Indian children separated from their families by nontribal public and private agencies.

U.S. Secretary of the Interior Deb Haaland, who is of American Indian descent, also has petitioned the Supreme Court to uphold the law, while the state of Texas, on behalf of Chad and Jennifer Brackeen, have petitioned the high court to repeal the law, claiming it is unconstitutional.

ICWA has withstood legal challenges for more than 40 years, but in the past four years federal judges have been divided on its constitutionality. 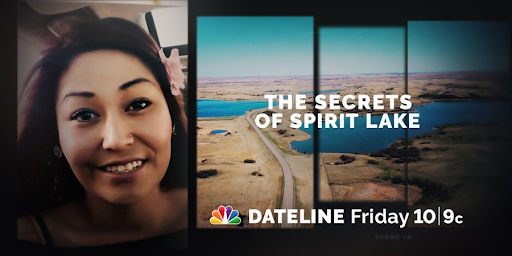 Native Americans from all over should set their DVR's and plan to watch tonight's episode of DATELINE NBC (See trailer at link). Secretary of the Interior Deb Haaland will be featured for a bit.
CARLA YELLOW BIRD's abduction will be told.   #MMIW has gone mostly unnoticed, mostly unreported in the national media.

The Secrets of Spirit Lake' will follow Lissa Yellow Bird, whose amateur sleuthing exposed cracks in law enforcement's investigation into her niece's disappearance in 2016

PLEASE watch the trailer at the link above and share.  IF WE DRIVE RATINGS, they will do MORE STORIES.

Kozee Decorah's MURDER by BoyfriendSavanna's Act addresses the issueMISSING/MURDEREDWhite Women in Jep  Gets all the media. No room for stories about Native women?Nooksack Stalking of Native Woman  is how it starts
FOX NEWS leads with MISSING WHITE WOMANAnd take a look at this website:  Justice For Native Women

Posted by OPechanga at 7:00 AM No comments: