The Pechanga Band of Indians in Riverside County has donated $100,000 to the Monterey Park Lunar New Year Victims Fund, according to Pechanga.

Pechanga and Monterey Park have a partnership, officials saying that the city “opened its arms to Pechanga more than a decade ago to partake and contribute to the excitement of its Lunar New Year Festival.”

“As we mourn the victims of Saturday night’s tragedy, Pechanga’s commitment to the community remains unwavering, the Band said in a statement. “A contribution of $100,000 has been made to the victims’ fund in solidarity with their families and community.”

Noted Indigenous Attorney Gabriel Galanda, a champion for Native Justice,  has a treatise up on Indigenous Kinship Renewal and Relational Sovereignty  It's a must-read for all.  Can tribes return to the "Indian Way"?   Disenrollment is NOT the Indian Way 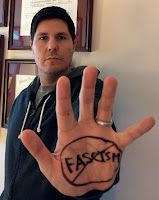 By drawing on Indigenous traditions of reciprocity and shared destiny, Native nations should reconcile their peoples’ modern individual rights with their customary obligations and duties to one another. Through these strategies, Native nations can engage in a new paradigm of relational sovereignty, whereby Indigenous human existence is exalted and protected over individual power and profit.


Posted by OPechanga at 9:06 AM No comments:

I KNOW!  Let's have a meeting at the most ABUSIVE TRIBE in CALIFORNIA!

As we who have been dismembered from our tribes in THIS century, via tribal disenrollment, it appears only SOME historical wounds matter.  And when they put one of the chief purveyors of stripping tribal citizenship for power, Mark Macarro, chairman of Pechanga on your committee, HOW SERIOUS can you be about truth or healing?

Why does the historical trauma get more attention than the current 21st century trauma our elders and our youth experience now, when it matters to the LIVING?   Are bones more important than people? Tribal disenrollment in Indian Country is a sort of paper genocide. It's nothing compared to the horrors in Africa, however, tribes have eliminated large percentages of their people.

The February meeting of the Truth and Healing Council is going to be held at the casino of the state's MOST EGREGIOUS disenrolling tribe, the Picayune Rancheria of Chukchansi Indians, which has eliminated FIFTY PERCENT of their tribe THIS CENTURY. 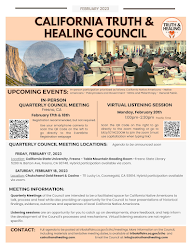 Read more on Chukchansi.  They are HORRIBLE

As John McEnroe famously said, YOU CANNOT BE SERIOUS!  To reward an abusing tribe like Chukchansi is depraved indifference to the suffering of their people BY the leaders of the tribe.

Stripped tribal members of their citizenship
Denied voting rights to members
Taken away rightful healthcare to seniors
Blocked access to land on the reservation
Denied members due process of law, including legal representation, even writing tools.
Prohibition of practicing religion, including the right to pray at their ancestor's graves.
Threatened others if they speak out violating free speech
Subjected some to ex post facto laws.
Banishment from reservation at a whim.
Failure to follow the tribal constitutions (Pechanga's Macarro did)
Disallow burials where their ancestors were buried. We are surprised we haven't had to dig up our ancestors and have them buried elsewhere.
Tribal Disenrollment is "Like Being Raped,Then Going to the RAPIST for Justice"

This is TRUTH, why aren't they looking at HOW TO HEAL this TRAUMA?   Why does Gavin Newsom choose civil and human rights violators to be on his commissions? Get serious Gavin.

Send them an EMAIL and express your moral outrage: