Shades of GEORGE WALLACE at the Pechanga Reservation.  Pechanga Chairman Mark Macarro keeps Natives segregated.   Well he and Wallace were from the party of Segregation and Jim Crow.

We have written before on the APARTHEID system in force at Pechanga Reservation in Temecula CA. 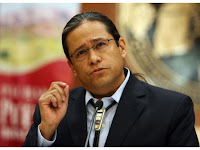 APARTHEID as described by the dictionary is:
a•part•heid
2. any system or practice that separates people according to race, caste, etc.

Pechanga is doing just that, determining that families with historical ties to the origins of the reservation are ‘no longer pure’ in their eyes. They may be Temecula Indian, but “they aren’t Pechanga.” Even though the expert hired BY Pechanga proved that we were using the TRIBE's own evidence.

Here is what Pechanga members who have been stripped of their citizenship in the tribe have lost:

Pechanga now has a group living on the reservation that have:

• Lost the right to vote
• Lost their rights to healthcare provided by the tribal government.
• Their children can no longer attend tribal schools, in fact some were FORCED from School.
• They can no longer be buried in the reservation cemetery with their relatives.
• Are not protected by the Tribal Rangers. Or in some cases FROM the TRIBAL RANGERS s

Here is a copy of the letter that was presented to those people living on the reservation who are called "non-members" even though most are living on land that was given to their ancestor when the reservation began, roughly 90 years before council member Russell "Butch" Murphy was adopted into the tribe.  The Tribal Rangers trespassed on private property, to warn residents about.....trespassing charges for using the drinking fountains and restrooms 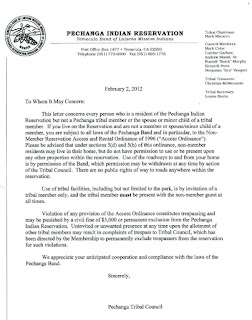 The threat from the Macarro lead tribal council  is very clear: Fine of $5,000 and exclusion from their own property. THAT is APARTHEID, pure and simple. The tribe is trying to force residents who own property OFF the reservation, and now working to control water rights to land owners, so they have enough water to fill their new water feature at the Pechanga Resort and Casino.

Posted by OPechanga at 6:17 AM

Their not kicking land owners off their property yet are they????

They threaten to they have even had security tell us that we can be band from our home and allotment if they choose.

I just don't Understand how the United States Gov. advocates that they are proud to be a Gov. based on True Justice and yet refuses to give Justice to this countries 1st citizens. The U.S. has not made any progress in over 100 years???

In the photo why is Mark showing the public the size of his man hood?

Saying you are a Sovereign Nation is a double edged sword.. But blaming the U.S. Government when you should put the blame on your tribe letting the leaders get away with this garbage, is also conflicting.

The true spirit of the tribe has always come from the people of the tribe. Harmony within must be worked on and we know it takes every person of the tribe to make the tribe successful. There was a time when all who were of the tribe had their place. Some were hunters some were healers. Others were leaders and still others were gathers or growers. The list goes on with people using their skills and talents to make the tribe a true community. That has gone away. The decay of the community started when the people were placed on reservations and controlled through isolation and education. The people have overtime learned the ways of those who concord them. Marc is not a real Indian he would not know the first thing about a cleansing ceremony of the spirit.

There's always assholes in the tribe. It's about the people realizing and dealing with these assholes. What happens when you get one asshole that takes over the leading assholes job? It's starts all over again. White Buffalo you are correct. It's about true spirit and educating the youth about having tribal respect. Hopefully it can be redefined. A'ho!!

Its been broadcast that some of the younger do not agree with their elders on this subject. It may be tomorrow or a couple generations but the story will change. Hopefully the Apartheid running band members will remember that if these actions are fair it may happen or other actions may happen to teach us ALL a lesson of life. Not ALL business is handled internally, and the band may have to step forward and ask for rights. Water rights today is one. What is tomorrow rights the band wants? Should they have rights today if ALL members cant share the bands rights today?

It's always the little feminine guys that try to be all tough. Mark is trying to make up for something. Probably a very tiny "personality". Lol.