Department of Interior Chooses AGAINST the Side of JUSTICE in Nooksack 306 Case.

Come on SALLY JEWELL.  Why is it so hard for your departments to DO THE RIGHT thing and protect the individual Indians against corrupt and in this case ADOPTED chairman? 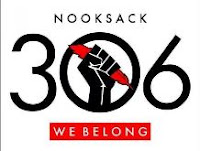 The U.S. Department of Interior urged a Washington federal court on Friday to toss two Native Americans' heavily trimmed complaint challenging their tribe’s bid to raise its ancestry requirements, arguing the suit's remaining claim, made under the Freedom of Information Act, came too late.
In May, U.S. District Judge Richard A. Jones pared down a complaint by Rudy St. Germain and Michelle Roberts, who are members of the Nooksack Indian Tribe of Washington with mixed Filipino ancestry, over the tribe's membership standards. The move leaves only a pair of claims standing against the agency and the Bureau of Indian Affairs for alleged violations of FOIA and the Administrative Procedures Act.

"The real tragedy is that we had to sue the government at all," plaintiff Michelle Roberts said in the statement. "The BIA has a fiduciary and trust responsibility to act in our best interests, as enrolled Nooksack members. Forcing tribal members to file federal lawsuits in order to receive the most basic of documents — documents that they are entitled to under federal law — is clearly not in our best interests."


Only a claim under FOIA remained after the tribe members amended their complaint in June, but the FOIA claim included in the amended complaint was based on a July 2013 request that wasn’t submitted until after the original complaint was filed, depriving the court of subject matter jurisdiction, the government said.


“Because subject matter jurisdiction did not exist at the time this lawsuit was filed to adjudicate a claim arising from a FOIA request that had not yet been tendered to BIA, the action must be dismissed,” the government argued.

The plaintiffs sued DOI and several of its officials in May 2013 over a “secretarial election” the Nooksack tribe held that year to approve an amendment that erased a provision in the tribal constitution granting membership to “persons who possess at least one-fourth degree Indian blood and who can prove Nooksack ancestry to any degree.”

St. Germain and Roberts claimed the amendment was a pretext to cast out of the tribe — or “disenroll” — more than 300 members who are of Filipino-Nooksack ancestry, according to the complaint, which faulted the department for authorizing the vote and signing off on the amendment despite various purported electoral irregularities.

In May, Judge Jones said the tribe members failed to show that the department discriminated against them by unconstitutional election practices and hadn't stated a viable breach-of-trust claim stemming from the government’s alleged mismanagement of the vote on the amendment.
The judge also tossed a claim alleging the department violated the Indian Reorganization Act by wrongfully deeming the amendment legal, finding the claim was moot because the complaint only challenged the agency’s review of the amendment prior to the election.

On June 15, the plaintiffs filed a second amended complaint that dropped all claims regarding the election under the IRA, APA and the Constitution, as well as a FOIA claim based on a March 2013 request, the DOI said. Instead, the amended complaint accused the DOI of miscalculating processing fees and improperly denying their request for a fee waiver in connection with their July 2013 FOIA request, according to the DOI.

However, the court has no jurisdiction over claims connected with that request because it was filed with the BIA after the original complaint was filed in May 2013, the government claimed.
In addition, the claim should be dismissed as moot because the BIA decided around July 24 to waive all of the processing fees connected with the July 2013 request and begin processing it, the DOI said.
The inclusion of the FOIA claim for the first time in the second amended complaint doesn’t change the subject matter jurisdiction analysis, which hinges on the situation when the complaint was filed, the government argued..

The U.S. Department of Justice declined to comment on the case Monday.

Email ThisBlogThis!Share to TwitterShare to FacebookShare to Pinterest
Labels: Sally Jewell; Secretary of the Interior