This NCAI statement below makes me want to PUKE. The National Congress of American Indians has studiously IGNORED the ongoing trauma brought by their own Vice President Mark Macarro who took the word of an imprisoned child molester in the Paulina Hunter disenrollment 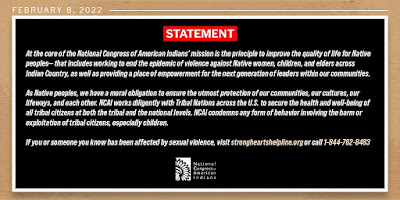 The breaking news this weekend of the arrest of noted Native artist Bunky Echohawk has seen many Native groups moving swiftly away from him.   The statement above from the NCAI is ass covering, without mentioning the offender that prompted it.

The sordid issue with Bunky, harming a child, reminds many of us from Pechanga that one of the strongest voices against our family, was an imprisoned child molester Vincent Ibanez, pictured below

Despite the unequivocal proof of Paulina Hunter as an original person of Pechanga Temecula the ROD (record of decision) notes “Raymond (Felon) Basquez, Sr., Gloria Wright, and Vincent Ibanez (then imprisoned for child sexual abuse) provided affidavits and statements to the Committee contending that Paulina Walla Hunter and her heirs were not historically recognized as Pechanga members.”    NONE of these "fine citizens" were alive when Paulina Hunter was, like vaunted elder Antonio Ashman, who gave an affidavit that he KNEW HER as Pechanga.

ALSO, while a member of the Enrollment Committee, Mr. Ibanez signed the enrollment cards and official date stamped letters welcoming Hunter family members to the tribe.

So if Mr. Ibanez never believed we the Paulina Hunter descendants are Pechanga, then why would he sign cards and official documents saying that we are Pechanga and then turn around and say the opposite years later?

So was he lying when he gave a statement against our tribal membership or was he lying years earlier by signing cards and documents affirming that we are Pechanga?

Ibanez the fine, upstanding citizen of Pechanga was released prison, and later, was arrested AGAIN for sexual abuse,

IF the NCAI really gave a F**K about the "moral obligation" to protect our communities as the proclaim, they wouldn't avoid the tough issue of the stripping of federal recognition of 11,000 Natives through disenrollment.  And recognize the harm it's doing to generations of us.

Posted by OPechanga at 2:14 AM

The truth is and will continue to be shared. Thank you for sharing.

is that guy crossed eyed.

Nah hes not cross eyed he just had laser work on his eyes Victor, where was you in 1962 wnen at a tribal meeting the Hunter family was told by the members they were not from Pechanga and had to leave the hall your vaunted tony Ashman was there why didnt he stand for them instead of agreeing with the people this was some 15yrs. befor the casino and per cap. monies you forget to mention that Paulena Hunter got her allotment through her husband who worked for the BIA also he was caught stealing cattle that was for the tribal farming project you guys are almost a quite a piece of work as I am but at least i did not steal from the tribe this is your oral history puulanaish said that