February 2012 brought more bad news from California's Indian Casino Country.  The disenrollment of 154 citizens of the Pala Band of Luiseno Indians, with some subterfuge from the current chairman Robert Smith.  He had Margarita Brittain's blood quantum changed. THE BIA stepped into the membership dispute 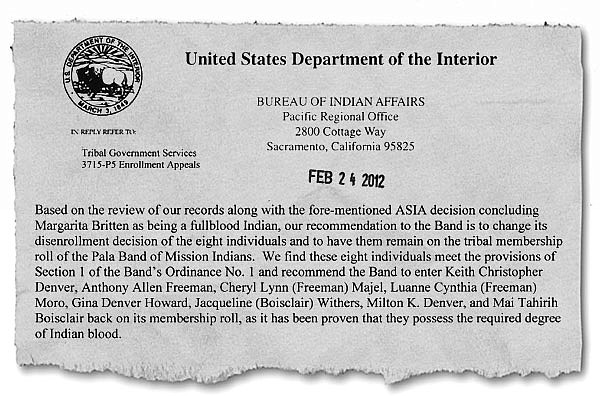 On the official 1913 Pala enrollment documents, Margarita Brittain is listed as a full-blood Cupeño Indian. In the 1970s, however, it was discovered that someone had gone into the document, circled Brittain’s blood degree, and in ink changed her blood quantum to ½ and her children’s to 1/4. Her descendants speculate that the change was made out of spite, because Margarita Brittain had married a white man and taken his name.

BACKSTORY
The removal of the 154 people appears to be connected to the removal of eight people from its rolls last year. Those eight people were told in June by the tribe that they did not meet the 1/16th Pala "blood quantum" requirement.Pala spokesman Doug Elmets said the tribal council made the decision to remove the additional 154 people Wednesday, but he declined to discuss the reason for the removal."It is important to remember that the U.S. Supreme Court, in the Santa Clara Pueblo v. Martinez case in 1978, held that a tribe's right to define its own membership has long been recognized as central to its existence," Elmets said.
Edward Sifuentes of the North County Times has the story:Pala officials said last year that the tribe had 918 members; thus the 154 people expelled Wednesday account for about 15 percent of the tribe.  (OP: 16.7%)The terminated members lose their ability to participate in Pala's tribal government and other benefits, including health care, housing and educational services.Those who have been expelled from Pala stand to lose more than $150,000 a year in payments from the tribe's Pala Casino Resort and Spa, which is about 15 miles north of Escondido.Attorney for some Pala disenrolled, Dennis Chappabitty is asking that Congress hold field hearings to see that the disenrollments are designed to extort tribal members to silence them from questioning whether there are millions of unaccounted tax dollars spent without accountability.The amount of per capita STOLEN from those terminated will total $23 MILLION per year.

ROBERT SMITH IS SCUM
Read how only a few were targeted.   Pala Chairman Smith: Violations of the 14th Amendment In Pala Disenrollments? Who NEEDS Equal Protection, Right?

PALAWATCH  has a deep dive on all the issues.

Posted by OPechanga at 7:00 AM

Good job shining light on the truth cousin. Keep it up

THANK YOU.... but the spotlight gets BRIGHTER when each post gets shared on social media...

I hear some disenrolled Pala people (cupeno,s) are in federal court forming their own tribe. can you comment on this it might help other disenrollees

Thank you for sharing.

The Agua Caliente Tribe Of Cupeno Indians of the Pala Reservation (ACTCI) sued the BIA for refusing to reaffirm the tribe even though there are other reaffirmations for tribes with far less evidence of federal recognition. The 9th Circuit Court of Appeals agreed with the BIA decision to deny administrative recognition of the ACTCI and directed the ACTCI to petition for Federal Recognition under the Part 83.12 procedures for acknowledgment. The Part 83.12 regulations instruct the Office of Federal Acknowledgment to review petitions for evidence of prior acknowledgment and to apply relaxed standards for tribes that can prove there was a prior government to government relationship.

Currently the OFA is refusing to assess the ACTCI for prior acknowledgment and requiring the submission of a complete petition under Part 83.11. It is total bullshit. If there is evidence of prior acknowledgment then much of the material submitted in a Part 83.11 petition will be discarded. Just a way for the BIA to delay the ACTCI, make them spend extra time and money, and jump through hoops to satisfy an inapplicable standard.