Tribal Disenrollment Restrospective: The Enterprise Rancheria Disenrolled Members for Speaking OUT. Who Needs 1st Amendment Rights. Eighth in the Series 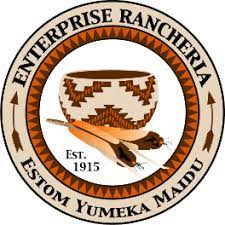 Here's a story of the ENTERPRISE RANCHERIA who disenrolled over 70 members in 2003, please take a look.  Oh, and there is an update at the end

Thirty former members of Enterprise Rancheria protested in front of the tribal office Saturday, while one disenrolled member waited for an appeals hearing at the Palermo Grange.

Saturday, the Enterprise Tribal Council held an appeals hearing at Palermo Grange to decide if one disenrolled member, Rick Wilson, could return to tribal rolls.

"Everything they did there was a farce," Edwards said. "It was another kangaroo court."

Edwards said the tribal council brought up issues for Wilson's disenrollment that had happened after Wilson was removed from membership. Edwards said Wilson was escorted into and out of the meeting by two armed security guards.

"They're treating us like criminals, and we aren't criminals," Edwards said.

Edwards said he and 11 other members would go before the council on November 4, which will be almost three years after they requested appeals hearings.

The disenrolled members had signed a petition and asked for a vote to recall the tribal council back in 2003. However, the council responded by disenrolling the members who asked for the recall.

A few months ago, Enterprise Rancheria Tribal Chairwoman Glenda Nelson said the council had disenrolled the 72 members to keep the tribe from being divided and preserve the unity of the remaining tribal members.  Ironically, Glenda Nelson was the tribe's Treasurer in September 2003 when this occurred. She successfully suspended the 72 members, pending disenrollment, in a manner timely to prevent those members from voting in the recall election scheduled to be held seven days later.

OP:   Preserve UNITY?  By taking away the right to VOTE the way you want?   What if the Republicans took away the Democrats citizenship because they were against the Republican candidate, or because they voted to recall a politician like Gray Davis or Cunningham from San Diego.

Nelson was one of the tribal council members the disenrolled members tried to recall in 2003. Edwards said several Indian rights groups were fighting for legislation that would protect tribal members from arbitrarily being disenrolled by tribes, which has happened in California and around the nation since tribes started receiving gaming revenue.

Ricky Wilson said he applied for an appeals hearing after he was disenrolled in 2003, which he said was supposed to be scheduled within 60 working days.

Almost three years later last Saturday, he attended the hearing in Palermo, where he waited outside from 9:30 a.m. to almost 2 p.m., he said. The hearing lasted until 5:50 p.m., he said, with the tribal council taking most of the time to cite his actions against the tribe after he was disenrolled.

The tribal council cited issues that had taken place since the disenrollment he said, such as speaking out against the tribal council including a "Letter to the Editor" he wrote to a newspaper. (OP: Getting abused and then COMPLAINING about the abuse is WRONG?)

When Wilson tried to speak in his defense, the council said if he didn't keep quiet, they wouldn't let him testify after the council had spoken, he said.

"They didn't allow me due process," Wilson said.

He said the complaints the council testified that he publicly criticized the tribe's tactics regarding the disenrollment. He said the tribe violated his civil rights including free speech, and he would like some government entity to hold tribes to the letter of their constitutions, so members couldn't be disenrolled so easily.

Before the disenrollment, the 72 members received incomes from casino gaming funds. According to the disenrolled, they were kicked out because they criticized the way the tribal council did business.

"It was to get me out of the way, so they could do their own business, and it wasn't above water," Wilson said.

Nelson, the tribal chair, didn't respond to requests for comments before press time. However, in the past, Nelson has maintained the tribal council did not mismanage funds, and they disenrolled members who were trying to divide the tribe.

Congratulations to the Enterprise Rancheria for finding it in their hearts to DO THE RIGHT THING.  It's not difficult.Thirteen years after disenrolling 73 tribal members, in a move that was orchestrated and illegal in 2003,  the Tribe sent letters of appeal for potential membership in the tribe.  25 disenrolled members applied for reinstatement.

Posted by OPechanga at 2:30 PM

I want to thank Rick Cuevas for his ongoing efforts to keep all of us who have experienced tribal disenrollment apprised of where the situation stands today.
Although, I chose not to re-apply for membership in the Enterprise Rancheria tribe when I was invited to do so. I am very supportive of the decision by the formerly disenrolled members who have opted to return to their tribe.
Unfortunately, there have been changes made to the Enterprise Rancheria Tribal Constitution that now enable Glenda Nelson, the Tribal Chair and others to remain in their positions indefinitely. I can say without hesitation, this is not in the best interest of the tribe. It is just another violation and manipulation of the rights of tribal members. I'm hopeful that at some point collectively they will rally for the changes that need to be made.