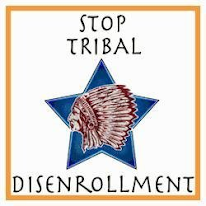 From James May in Indian Country Today

Several hundred disenrolled members of various California tribes staged a lengthy and loud protest on the steps of the state capitol asking Gov. Arnold Schwarzenegger and the state legislature to immediately halt signing new compacts with the state's tribes as a first step toward creating an inter-tribal appeals process for disenrollees. (OP: Money over morality won Ahnuld was worthless)

At least nine tribes were represented at the July 14 demonstration and areperhaps a testament to a growing controversy in which increasing numbers ofthe state's tribes are finding themselves left without tribal membership.

The tribes at the protest represented a fairly balanced geographical crosssection of the state and have formed an organization called CaliforniaIndians for Justice. Organizers said this demonstration represents thefirst step that the group plans to take and claim that they willdemonstrate at various tribal casinos as well as the U.S. Congress inWashington, D.C.

Though questions of Indian policy and issues are usually handled by thefederal government, organizer Laura Wass, who works with the Fresno chapterof the American Indian Movement, felt it was important to start inCalifornia.

READ the full article at the link above, and share on your social media.

Posted by OPechanga at 8:00 AM

Once began, CNC machines are extremely productive best color pencil sharpener and might produce many elements in no time. Unlike different manufacturing methods, CNC milling permits machine shops to provide massive quantities or a single mannequin. CNC machines don’t restrict you to how many of} elements find a way to|you possibly can} have manufactured directly, allowing you to make use of your cash and assets extra efficiently. If the operator needs to provide small orders of varied elements, all they need to|they should} do after finishing one design is to alter the program to set the subsequent kind. With this increased flexibility compared to with} different manufacturing methods, CNC machine shops can fulfill many orders, from massive batches of the identical elements to particular person prototypes.