Many of our readers have seen the video of Pechanga Band of Luiseno Indians Chairman Mark Macarro claiming that Hunters came out when "they might have something".SEE: KNBC’s Without A Tribe

Well, here's a bit of proof, via Pechanga's OWN paperwork that shows that we've had a presence for over 120 years. 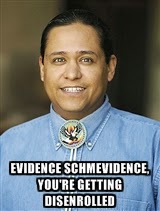 This is a document from Pechanga Chairman at the time (prior to his imprisonment for child molestation) Vince Ibanez to the BIA.   This is a census that shows people living on the reservation and it's clearly marked WHO is an Indian and who is not.   Our family, the HUNTERS are represented by the Madariaga's and the Judkins (line items 29-34) representing 8% of the Native American population of the reservation. Our numbers have grown since then as permanent members of the reservation.

As a reminder to "CORNY" Mark Macarro, where the F**K are you, or your father, or grandfather.  Oh, yeah, they SOLD their land on the reservation, they cared so much.  Ours is STILL in our hands, 120 years later.

CONSPICUOUS by their ABSENCE is ...wait for it.... ANY MACARRO family!  WTF?!?  Mark, have YOU NO SHAME?    Victor Rocha, where are YOUR family members?   WE were there before YOU, you lying pieces of shit.  And hey, there's no representation of the RUSSELL MURPHY family either?
Yet, the Hunters who lived on the reservation when there was NOTHING, gets disenrolled?

Looks like Macarro should be apologizing, and making sure that the membership rolls are corrected and as the tribe wanted, Hunters to be in their rightful place in the tribe.

Wonder if Macarro ever lied to his wife like this? Uh...wives...

Like Mark told the senate. Its a complicated matter

Fred Magee's kids on list (but not him)? No Calcac's ?

No Jennie,ruth or andy ? hahahaha jajajaja??

You aren't going to make friends OP, by exposing the truth about Macarro and Rocha.

Send it to the DOJ NOW !

Absolutely disgraceful! Protest! Time to work together to get Senate Committee on Indian Affairs Hearings.

Time for Hunters to get off their lazy asses and start doing some work..

Mark Macarro needs to be investigated and then disenrolled.

Mark Macarro is in the process of being SHAMED! Thank you OP, for keeping these issues out front.

What an embarrassment, or it would be if he had any shame.

OP must be lying. Brian Williams said he was with Macarro on the Rez in the 70's.
He said Rocha wasn't the asshole everyone thinks he is. Williams also said that Ibanez was a good babysitter...
film at 11...

Do you realize what that means in court? When you sue the BIA hard for them to say sh.t would you produce stuff like that.

Too many problems in Indian Country, I smell a new 2015 California Judgment Roll.

ICRA Indian Civil Rights Act...
the Bad Actors want to violate others rights and disrespect our Ancestors and elders. The truth is more right than bad actors lies and misinformation. We are not going anywhere. We belong always and forever.

what's a criminal always a criminal?
face the truth now or let your children face it for you later. it's crystal clear either you're going to get it or they'll have to face it.

Macarro means, recognition started when I said so. I don't care who was here when their was no money sources. I only recognize people who recognize me and I'm sticking to it. I run the Bad Actors faction. Who cares how the rez was created? The documents and recorded history of the Pechanga Ancestors mean nothing. Sad sad sad. Hopefully we can ALL wake up and face the truth.

One thing for sure. The National Archives carry the TRUTH. Temecula Band sometimes referred to as Pechanga Bands Recognition was started over 120yrs ago and recorded. All recordings are crystal clear. Come on lets ALL recognize the truth. Our Ancestors would like the truth over the lies.

The Pechanga sheep are paying for Macarro and council's trip to Europe for a conference.

Spouses too? And WHY does John Macarro get to go? He has nothing to do with gaming. Sucking off the teat of the tribe.

Come ON Basquez, they are spending YOUR money.....

Didn't I read on here that Basquez isn't really Pechanga either?

But it isn't a requirement to live on the reservation but it begs the question why Macarro would have the nerve to say that when the casino came along that a bunch of people showed up when discussing the disenrollment of the Hunters when there were Hunters living there well before he ever showed up. By the way, over 50 Hunter family members had lower enrollment numbers than Macarro has.

The liars can continue the lies or face the truth. Now and after they leave the earth. The story and truth should not be disrespected the liars. Our ancestors where forced to settle with the government and where pushed around by settlers who believed they deserved more than our Ancestors. The truth is Crystal clear. Take back the lies and misinformation, and pay forward the truth. Live in the truth and respect ALL our ancestors. We would not be here today without them. ALL of them.

Hunters have been ON the reservation since before Macarro was BORN. His father too.

Mark does lie, all over Ancestry.com jajajajaja!

TOM BRICE, GOD BLESS AMERICA said...
This comment has been removed by a blog administrator.
February 20, 2015 at 3:19 AM