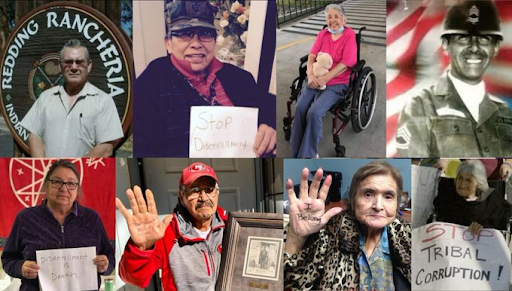 My friend Cam Foreman, a Lorena Butler descendant from the Redding Rancheria has a terrific op/ed published by the estimable Indianz.com which has consistently gotten the issue of tribal disenrollment out front.  I'm happy to say I've been quoted an published there as well.


The following is the text of a letter sent to Secretary of the Interior Deb Haaland, Assistant Secretary for Indian Affairs Bryan Newland, National Congress of American Indians President Fawn Sharp, and members of the Senate Committee on Indian Affairs and the House Subcommittee for Indigenous Peoples of the United States.

We are at a crossroads in United States and Indigenous history.

For the first time we have Indigenous people leading Departments of the Federal Government that were formed for the purpose of controlling and exterminating Indigenous peoples. It is time to demand that Indigenous Americans receive the same human rights protections as those who have arrived in the U.S. over the last 500 years.

Through national Indigenous leadership, our country is reckoning with its imperialistic history and injustices still suffered by our country’s first peoples. Our country is finally acknowledging federal Indian boarding schools where Indigenous Parents, Grandparents, and Ancestors faced unimaginable abuse, hardship, and death. Our country is contending with today’s epidemic of murdered and missing Indigenous women and girls (MMIWG). Our country is also coming to grips with the reality that Tribal nations have not always been on the right side of history. Some Tribal nations owned slaves until the 1860s. Other Tribal nations violated their own peoples’ civil rights once the U.S. formed reservations in the 19th century.

When it is Tribal members whose voting rights are stripped by autocratic regimes, where are the federal and national cries for voting rights protection?

Tribal sovereignty should not be used as a shield to hide these Indigenous human rights violations that are happening right here in America. “Sovereignty” was the word southern state segregationists spoke in the 1950s. “Sovereignty” is the word autocrats in banana republics speak when the United Nations intervenes to prevent human rights abuse.

Posted by OPechanga at 8:59 PM

***a descendant of Virginia Tommons***

***A descendant of Virginia Timmons***

Disenrolling is not our culture custom or tradition.
Sovereignty abuse is disgusting.