NOOKSACK Disenrolls 33% of their LIVING Tribal Members; Dead will also be Exterminated 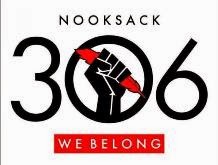 The Nooksack Tribe of Washington has removed 289 "non-Indians" from the rolls, scumbag Chairman Bob Kelly confirmed last Wednesday.
Kelly, who reportedly is ADOPTED into the Nooksack Tribe, did not address claims that his tribe is functioning without a valid governing body. Instead, he characterized the action as a means of correcting mistakes in the rolls.

“This has been a long and difficult process, and the Nooksack people are glad it’s finally over,” Kelly said in a press release. “Both tribal and federal law recognize that sovereign tribal nations have the right to determine their own membership."

According to the press release, the dispute began in 1983, when certain individuals were "erroneously or fraudulently" enrolled in the tribe. Many of those who were removed are part of a group known as The Nooksack 306 and Kelly said they were unable to prove their citizenship.

"The individuals disenrolled today all failed to show that they are lineal descendants of Nooksack tribal members, or that they have at least ¼ degree of Indian blood," Kelly said. "Each was provided a disenrollment hearing, with advance notice, as well as an opportunity to provide proof of membership to satisfy the enrollment criteria set out in the Nooksack Constitution. They either would not, or could not, prove their status as Native Americans, and in fact, they didn’t even try.”   OP:  He did not even MEET with all of them, and has no proof that the right people were on the other side of the line.

The hearings referenced by Kelly took place over the phone -- not in front of the tribal council -- and lasted, at most, 10 minutes for each person, according to accounts shared by The Nooksack 306. Participants derided the proceedings as a mockery of their rights.

"I stood firm in my ways, spoke from the heart and on behalf of my late mother and grandmother," Toni Jones, who was among those disenrolled, said in an account shared by the group. "I will not be bullied by a fake council and I am not scared to stand up to them and speak the truth. Our history is not made up, first of all we have our oral history and second we have the documentation to prove our Nooksack heritage."

Both the Bureau of Indian Affairs and the Indian Health Service warned Kelly about the lack of a quorum on his nine-member council. According to the two agencies, four seats on the governing body have been vacant since March, and any actions taken since then -- including the mass disenrollment -- are not considered to be valid.

Yet nether agency has appeared to take any punitive actions thus far. Deborah Alexander, who was among those removed, on Monday said she has been denied medical and dental services at a clinic the tribe operates under a self-determination contract with the IHS.

But failing to comply with the contract could eventually result in some sort of action, the IHS told Kelly in a November 18 letter, a copy of which was posted by Turtle Talk. Although the letter wasn't specific, federal agencies have gone so far as to withhold federal funds in similar governance disputes.

Elders are receiving calls from the clinic and are being told they are no longer eligible for services there. Emily at the Clinic is telling them all that she was given a list of people to call with that bad news. Lona surely gave her that list. Utterly disgraceful and dishonorable


To address the apparent lack of a quorum, the tribe is holding a primary on December 17. But an official 2016 voter's list does not include any of the people who were removed in the purge.

The list appears to contain fewer than 600 names so the tribe has cut its rolls by about 33 percent with the removal of the 289 people.
Posted by OPechanga at 3:50 PM

It's sad seeing these tribes disenroll their own people just for a higher paycheck. Money is only temporary but good deeds and love lasts for enternity. These corrupt tribes are choosing fear not love. I pray for them and hope they find the lost love in their greedy hearts.

It makes me so unhappy to see this happening to a once proud people. I know that this is not true for all of the Indian Nations, yet these bad few paint a picture that affects all Indians. If I had the money and the time I would spend my waking days fighting. I am saddened that I am unable to contribute in any meaningful manner other than writing letters. I would love to lobby both the State and Federal congress to make our voices loud and unified. I pray that we can ALL come together to fight this evil that now plagues our people.

It's time to back these corrupt leaders into a corner and make them show their proof that they say is as good as gold.
More like fools gold I think.
Time to protest like the standing Tribe.
This will for sure get the attention of the U.S. Government.
The reason that these Tribes are getting away with this action is because no one will do anything to fight it.
If you push back they will take your healthcare, your income, your homes, and your right to belong in the Tribe even if you have the proof that you belong.
So stop living in fear and stand you ground.
Take the right steps to get your proof of your belonging in the Tribe first and then stand you ground and go for the throat of these evil bastards.
Make it known to all that you are not going to stand idle and give away all that your ancestors fought and died for so you could have a happy and true place to call home.
Don't give in to those greedy bastards no matter what it takes, fight
to the very end.

Sorry I got carried away in the above post I meant to say the Standing Rock Tribe.