COMING TO STANDING ROCK? Hint: It's NOT a BURNING MAN FESTIVAL, Some GUIDELINES

I've heard from many people that with all the "helpers" coming to Standing Rock, many forget that they DO NOT SPEAK for the Sioux, a sovereign nation on this issue.  #NoDAPL
It's NOT a concert, while appreciative of the support, they are NOT their to serve YOU.    Take a look and share. 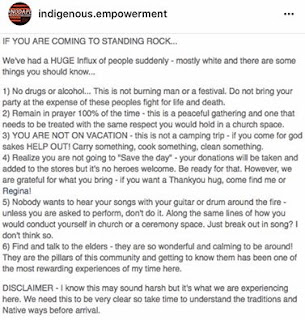 My cousins, who WERE there in September say:

Two stories I will relate from our time there. One, there was a woman in a white dress acting strange, she stood staring at the sky for about in hour in the road. Maybe that's how she prays in her culture? Two, there was a man who brought a bottle of whisky to the frontline on September 3, to keep warm. This was quickly poured into the outhouse so as not to pollute the ground. Upon returning from standing rock it was clear even natives here don't know much about the camp as we didn't before arriving.
Posted by OPechanga at 4:45 PM