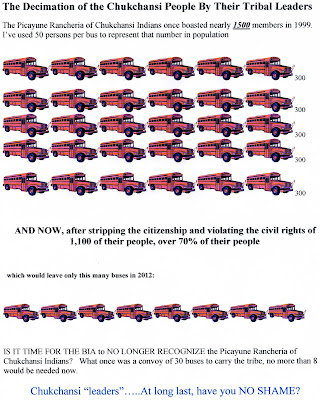 Will the BIA get its head out of the sand and exercise it's moral outrage?
Posted by OPechanga at 4:00 PM

The Chukchansi Council is operating more like a crime syndicate than an honest government.

How can the BIA stand by and watch the destruction?

That's a lot of buses to throw your people under...

So, who IS in charge at Chukchansi?

What's up BIA? Do what is right. Shut their casino down!

Is the stripping of citizenship cruel and unusual punishment?

The BIA stands idly by while tribe's destoy their heritage..

HOW many buses would Pechanga throw their people under?

Where are all the Chukchansi people? Does Bryan Galt still write about what is going on?

The answer is a big...."Yes!" They are eliminating large groups of "True Lineal Decendents" for their own "In-sash-able Greed!" These "Low Life Casino Indians" don't care one way or the other for "Birthright and Heritage," just how much more in Per Cap they can get with the removal of these "True Native Americans." They totally "Ignore" their "Constitutions and Bylaws" that are supposed to protect these "Oppressed Indians." Every action that the B.I.A. has taken, to date, is in "Backing" these "Casino Indians" and their "Criminal and Corrupt Acts." And "Indian Country" suffers. For "Justice In A World Of Injustice...."Is Non-Existent!" Let us "Hide and Watch" and see what "Action" the B.I.A. takes, if "Any!" You watch them use their old standby of non-committal "IT'S AN INTERNAL MATTER!" For again: "THERE IS NO MONEY IN HELPING THE OPPRESSED NATIVE AMERICAN!"

BIA is all about $ and land. Indians are such a bother! The United States wants Indians dead and gone;once and for all.

Blood quantum was employed to eventually 'blood out.' Greedy Indians are doing the job themselves by using blood quantum; a tool to kill themselves.

The U.S. has no sense of morality. It has no conscience;it's all about $ and land.

When all is said and done...when the
U.S. determines the time has come, ALL property will become U.S. property.

U.S. has continuously employed machinations such as blood quantum and termination.

What is happening in Indian Country today is by design. "termination" was struck down by the courts. However, "termination" policies continue.

Today, the confusion;chaos in Indian Country is still termination aka "self-determination."

BIA does nothing to stop criminal activities in Indian Country;
The machinations; schemes to rub out Pechanga lineal descendants and insert non Indians is all part of the big picture...the final solution.

Many would assume it has been James Joaquin Fletcher; descendant of Mexican ladrone. However, Fletcher is a puppet like all the other fools who are dancing to the tune of ultimate hidden hands.

Ah...Fletcher...so proud! What a legacy of theft and corruption he is handing down to his lineal descendants!

Nice rant, where is the evidence? You use the term Mexican as if the majority of Native Americans don't have Mexican blood.

FLASH MOB AT PECHANGA keep protest signs under jacket will advise of time and place inside.

Anonymous said...
Nice rant, where is the evidence? You use the term Mexican as if the majority of Native Americans don't have Mexican blood.

Anonymous's posting on February 15, 2012 4:25 AM speaks the "Truth!" Where have you been? If it "Walks like a Duck, Quacks like a Duck, chances are: "IT'S A DUCK".....Every "Government Entity," that is in place, has backed these unjust "Criminal and Corrupt Casino Indians" without "Question." That, in essence, is the "Proof!" We have "Constitutions and Bylaws, not to mention, "Tribal Law," that has stood the test of time, that now has no meaning to these "Criminal Tribal Leaders." Just their "In-sash-able appitite" for more, at the expense of "True Lineal Decendents." Now take a look at before the "Onset of these Casinos," and then after? You mean to tell me "You Can't See This?"... For "We Are Living It!" And the "Government Entities" that are supposed to "Protect Us" from the "Human and Civil Rights Violations" that these "Tribal Leaders" practice is "Non-Existent!" So the only difference between before the "Casinos" and after is the $$$$$. And there is no $$$ in helping the "Oppressed Indian."

All's you are giving is.. another rant.

Just because you put quotes around your stuff, doesn't make it any stronger.

Let's see...ducks..
What does bylaws have to do with BIA issues mentioned?
You aren't living it, you said you weren't even a member, so you never had it..
'
The BIA protected Guideville why isn't your case stronger?

Rants aren't helping much, other than to make you feel better. And the racism against Mexicans just puts you on the level of those that abuse..

BIA does nothing to stop criminal activities in Indian Country;
The machinations; schemes to rub out Pechanga lineal descendants and insert non Indians is all part of the big picture...the final solution.

NOT SURE WHO WROTE THIS (laughing my ass off) Hit the hammer on the nail!

Since when are documents racism? Hmmm....well...in the case of Ruth,and her clan, the fraud...documents could be fraud!

Ask Joaquin about ancestor...also, ask Joaquin if he is a lineal Pechanga descendant. His answer;intonation,body language are very revealing.

Frauds all use the same tells...ask Palinkas the Hungarian whiskey.

Anonymous said...
All's you are giving is.. another rant.

Just because you put quotes around your stuff, doesn't make it any stronger.

Let's see...ducks..
What does bylaws have to do with BIA issues mentioned?
You aren't living it, you said you weren't even a member, so you never had it..

The BIA protected Guideville why isn't your case stronger?

Rants aren't helping much, other than to make you feel better. And the racism against Mexicans just puts you on the level of those that abuse..

The "Majority" of what the B.I.A. has done for "Indian Country" is for the good of "The Casino Indians!" I have never said a word about "Mexicans." When I said, above, about he speaks the "Truth," it was in reference to the "Actions" of the "Corrupt and Criminal Tribal Leaders," and the "Worthless B.I.A. and their refusal to take action on behalf of the "Oppressed Indians" in their charge. I am a "Hunter!"

One of the posters DID use Mexican in a disparaging way.

You still haven't given a shred of proof in your rants.

Corrupt leaders are separate from a weak, unwilling to help BIA.

We can't post the 100 pages of court documents there was a few posted. Open your eyes , they were all signed by BIA employee,s.

All can be reviewed under the APA act.....Clear 5th amendment violation arbitrary and capricious on behalf of fletcher and Echo hawk.


arbitrary and capricious
(Absence of a rational connection between the facts found and the choice made).

I put your (shred of proof in my pipe)and I am smoking it...