Oh, if only the question was too far-fetched to believe, since they have already stripped voting rights and elder care from 25% of their tribe.  The Nazis forced Jews to wear these stars on their clothing in an overt act of persecution.    As we wrote about recently, the allottees on the reservation, who have had their land in the family since the beginning of the Temecula Indian Reservation, have now been threatened with trespassing charges.  A yellow star would make it easy for tribal members like the Masiel-Basquez crime family to recognize them on sight. 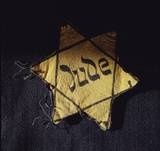 The drinking fountains at the park will be one area where the tribe could have a sign saying:  Tribal Members Only, No Temecula Indians Allowed.

They say that allottee may be excluded from their land if they are on the land of a tribal member, yet, Chairman Macarro's jackbooted Tribal Rangers trespassed on allottee's land to deliver the message. Yep, right to the front doors.     And since a sexual predator is in charge of dispatching Rangers and is a member of the tribal motorcycle "club", wouldn't you be worried?
\
Remember, some  Moratorium People have already been excluded...

Since the casino is on tribal property, any visitor could be charged with trespassing ..for any reason.
Posted by OPechanga at 11:06 PM

One of our Hunter family relatives who lives on the Rez told me that Yolie saw some Hunters walking by her house and another relative told me that one of our family members had his kids at the park and Yolie is the one who is pushing for harrasing our family.

Wow, that is really a reason to clamp down on us?

What does Yolie have to fear after all, it was in all likelihood one of her family members who took pot shots at enrollment committee Bobbi Lemeire's house prior to the first disenrollments of 2004 and also I wouldn't doubt that someone in her family is the one who shot up our Hunter Lane street sign, look at the bullet dents on the KNBC Without a Tribe video.

So she, if she crosses them, has more to worry about the thugs in her own family than she does about anything her paranoid mind might dream up that we would do.

Regarding the Hunters, guilty conscience getting to her so she is seeing ghosts that aren't there?

its about bullying. There is noone to stop them, and they never learned right from wrong.

The things theynmlearned in prison...

Hunters can't walk down the roads on the rez or go to the park but Yollie can drive her 4x4 vehicles through the middle of the Hunter property to harrass them. Don't forget that it was Yolllie that pushed people to sign petitions with false accusations to have the Manuela and Hunter and Garboni families removed from the Tribe's membership.

When is some one going to stand up and put a stop to all of this crap!!! Something drastic needs to be done now! If everyone wants this stuff to stop we all need to come together and do something.Do a sit in?Nationwide!All disenrolled Disenfranchised!! Whatever you want to call it! WE NEED TO PUT A STOP TO THIS!!!NOW!!!

Remember when a Hunter family member was told her kids could no longer attend the tribal school and when she was leaving the school with her kids a tribal member pushed her to the ground and the tribal rangers told her that they were only there to protect tribal members.

Also, the Riverside County Sheriffs were called but, somehow, the surveillance tape was not available and the deputies took no action.

I guess sovereignty allows the rangers to protect criminals who assault people.

Give mark a star to put on his car fucking allottee! (Your not a temecula Indian)

Mark whats this shit your telling people your dad was a listed tribal member ? And your Grandfather?

Mr. Macarro is not on the initial roster is he.

Irony...if Macarro is a legitimate Macarro blood, he is a descendant of Jews also.

Most CPP are so dumb, they probably don't even understand the significance of their segregation on the rez.

What about widows? Normans wife now fits in this category does she need an escort now? What about those Basquez who are in prison? Can their spouses walk around unattended?

Thank you OP for your unwavering dedication as the voice of thousands.

Yes, thanks OP and the others who contribute from other tribes...

I laugh myself into a fit when I see Hillary outraged about human rights violations in distant countries. Obama, U.S. Congress, NARF, ACLU, Indian Law Resource Center, Southern Poverty Law Center - all Hypocrites or "We won't lift a finger cause we might get some of your "blood money". Pala is member of CA Tribal Business Aliance who forked over several hundred thou to Gov. Brown to promote his tax effort. "Blood Diamonds . . . Blood casino money.

Maybe Brown can start a movement to tax the tribes that have Casinos on their per capita...it is a business and should be considered profit on a business...not tax exempt for any reason...and how many cheat the rule about living on the res so they escape State tax......tax cheats should be punished ...tribal or not....doesn't our United States constitution say "all men are created equal"....?....I don't remember a line in the constitution that says Tribal are any different than everyone else.

Casino's don't get per capita.

As to how many cheat the state, it makes one wonder why the state doesn't go after the one-percenters in the tribe who live off the rez.

All men created equal is one thing, all paying tax equally is another. The creators of our constitution didn't mean Indians or blacks...

A yellow star to denote you are lesser than people like the sexual predators, Vince Ibanez and Ron Rivera.

Lesser than felons from the Masiel Basquez criminals....

I meant the members of Casino tribes....not the Casino itself.

Why would Jerry Brown start a movement to tax per capita, when the tribes are giving HIM a million dollars?

Maybe dropping a dime on those who have PO BOXes would be lucrative for the reward from Franchise tax board..

"A yellow star to denote you are lesser than people like the sexual predators, Vince Ibanez and Ron Rivera.

Lesser than felons from the Masiel Basquez criminals....

Yes, those two are profiled on the Megan's Law Web Site that lists sexual predators but because they are trbal members they can go anywhere on the Rez they want to but we can't because we are no longer tribal members despite the fact that we our family are original allottees.

Especially scary since Rivera is a supervisor for the tribal rangers the internal security for the reservation.

He couldn't get a job anywhere in law enforcement or even an entry level job as a security guard anywhere else so how did he get his job working for Pechanga.

I guess it is because he is a member of the Masiel/Basquez crime family who seems to have a say so in a lot of what goes on at Pechanga.

The State is losing tons of money every month that the tribal members don't pay State tax on per cap....if it's true that Pechanga alone has say 1,000 members getting $25,000 a month...that's a total of 25 million dollars a month going untaxed...And that's just Pechanga....

BULLSHIT they will put a FUCKING yellow sticker on their car and they can't drink water at the park.

BECAUSE of their FUCKING SKIN COLOR asshole Pechanga member.

THEY can't walk in the CASINO BECAUSE OF THEIR SKIN COLOR either.

They can't walk on the SIDEWALK because of their FUCKING SKIN COLOR YOU FUCKING SORRY ASS pechanga members.

THEY CAN'T GO TO the SCHOOL BECAUSE of their FUCKING SKIN COLOR you ASS HOLE....

(are BLACKS or ASIANS allowed at the CASINO RACIST FUCKS)?

Well now, "Lookie Here?" "Anotherview" trying to sneek in under the "Radar! "There was more then enough "Evidence" to "Support Tribal Membership," and you "Damn Well Know It!" There was no "Error To Be Corrected." Just your "Fict-it-ious Lies!" Your own "Expert Proved That Without A Doubt," and "Pechanga" you absolutly know this "Too" be "True." Your "In-sah-able" apitite for $$$ is your only "Agenda!" And all this at the "Expense of the True Lineal Decendent."......"THIEVES," Nothing More!"

Does anybody know how low the per cap has one down?..I talked to some employees at the Casino and they say it's so slow that they barely get their full shift in ...the Casino is sending it's workers home early all the time and they continue to be very slow....the new guy that is running it is putting in so many penny machines and it's bringing in the wrong crowd....Pechanga is turning into another Saboba....penny players and tweakers....it has to be cutting into those fat checks.....what do you bet another family or two will get kicked out?....which families have an X on their backs???

That was supposed to say how much has the per cap gone down....typo....sorry

WHO gives a SHIT about your per capita RACIST pricks!!!

Or being banished for drinking at an Indian only water fountain...

The anotherview spokesperson says the action to disenroll was to correct the roll.

Was that why Bobbi LeMere's sisters were let in while there was a moratorium on adults? A correction? Or was it a quid pro quo for getting the Hunters out?

If correction of the rolls was the goal, then WHY aren't the Tosobols in the tribe? IF the LeMere sisters were let it, there should have been room for the Tosobols on the corrected roll.

THEIR ALL FUCKIN GREEDY, BUNCH OF DUMB ASS WETS! IE IT WASNT FOR THE CASINO THEY WOULD ALL BE ON WELFARE! HOPE YOU ALL OF HEART ATTACKS FAT FUCKIN LAZY WETS!

Well we have a racist commenter among us. Hope he's just drunk...

So.. did you guys ever get jobs? Or did you just return to the welfare rolls? I hope you got good jobs. The Casino is always hiring, business is WAAAAYYY up in the past year.