Why is doing the right thing so hard for some tribes? 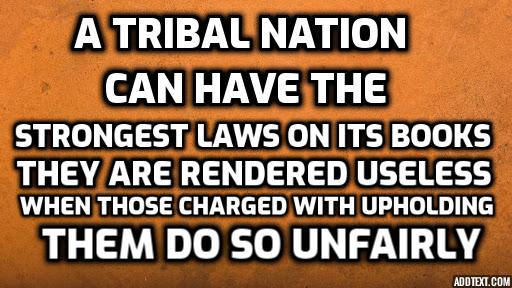 Pechanga: OUTSIDE their constitution:

The Pechanga Appeal Procedures state that the purpose of the appeal is in identifying any infraction to the disenrollment procedure or any unfair and/or partial handling of a disenrollment case pursuant to Procedures § 9, page 4. The Enrollment Committee committed numerous errors or infractions of fundamental Pechanga law and procedural Pechanga law as follows:1. Knowingly violated the will and intent of the General Council by continuing disenrollment proceedings after General Council’s vote to suspend all disenrollment; 2.. Violated the Pechanga Band Constitution by imposing a more restrictive membership standard than contained in Article II: Membership;3. Ignored the Official Enrollment Book of 1979 as the original source document for determining Membership as stated in the Constitution;4. Violated the Pechanga Band Enrollment Committee Guidelines by conducting disenrollment procedures without a lawful quorum and by reviewing disenrollment cases out of order for the purpose of stacking the Committee;5. Contradicted previous actions and decisions of the Enrollment Committee;5. Failed to indicate any mistakes or irregularities in the Appellants enrollment and failed to conduct the review of the Appellants’ case in a fair and/or impartial manner;6. Violated the Indian Civil Rights Act by retroactively applying 1996 Enrollment Application to Appellants;7. Violated Constitution and Disenrollment Procedures through application of more restrictive standards;8. Acted negligently in the review of the Appellants case.

The Department has a discrete legal trust duty under 25 U.S.C. § 2 toensure tribal governing documents are legitimately adopted by the Tribe as a whole.

Petitioners also contend that the Department has a legal trust duty to honorfinal decisions between the Department and the tribal government. Fed. R. App. P. 35(b)(2); 9th Cir.R. 35(a)(2).

When the Department legally recognizes a tribal constitution and enrollment ordinance not passed by the majority of tribal members, it violates the Department’s trust responsibility and invites tribal corruption, oppression, tyranny and dictatorship.

MONEY QUOTE:  The Bureau’s own former employee, Elsie Lucero stated under oath that the Band never legally ratified the Constitution as its governing document. [ER195-196] The submitted records demonstrate that the Department continued to recognize the Articles of Association as the Band’s governing document in its government-to-government relations both

Posted by OPechanga at 6:30 AM