Bobbi La Mere, then chairman of the Pechanga Enrollment Committee, which disenroll my family, and was the victim of a warning shot fired at her home, to make sure she followed the plan.  She later got her family enrolled, during a moratorium, in a Quid Pro Quo, while hundreds remained trapped. 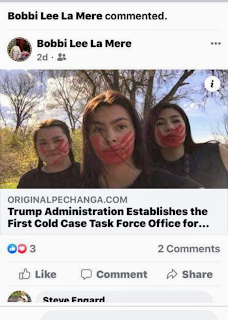 Imagine my surprise when I found she had shared one of Original Pechanga Blog's post of Facebook.  Maybe she's a Trump supporter?

The post IS important enough to share, and has generated over 500,000 page views in under a week.  I want to thank Bobbi for this small suppoort, even as her actions of disenrollment, has caused such trauma to my entire family.

Posted by OPechanga at 7:38 PM

I wouldn't thank Bobbi Lamer her action with her full knowledge of how illegality it was. She did this to enroll her sister that was on the moratorium now she act as if she is sorry for the disenrollment even though she was one of the people that was for it.

Yes, I wrote about that, you can find the article on my sidebar WUID PRO QUO.
The thanking is facetious, I just sent an email to the remaining Pechanga CPP emails I had...they can ask her about it...

Also wrote about it at Temecula Patch...

Was there even a vote...on what grounds...I take that back...there is no vote or grounds for this..you should be ashamed...I'm sorry