Paulina Hunter, Pechanga Band of Luisento Indians died in 1899. Never getting a chance to defend herself as she was defamed by disenrollment in 2006, She would have been almost 170 years old. Not quite time immemorial, but way, way back. Look for more #facesofdisenrollment stories on Original Pechanga's Blog on FB 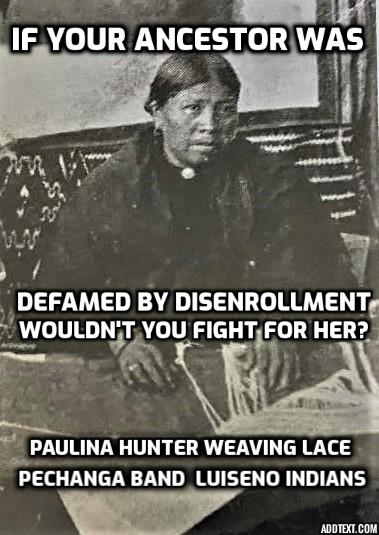 Her descendants still live on her allotment, given to her as head of household in 1895.  20 acres, allotment 62.  How many can say, they are descended from ORIGINL PECHANGA people

Here is part of Dr. John Johnson's letter to the Pechanga Enrollment Committee, which hired him to investigate Paulina Hunter:

Paulina Hunter was not an original Pechanga Temecula person,” is incorrect. I have already pointed out that my report presented evidence that Paulina’s father was the only Indian listed in the early San Luis Rey mission records who was actually born at Pechanga. Furthermore, the reasoning presented in Conclusion 5 is entirely based upon a misinterpretation of the evidence. John Miller, Paulina Hunter’s grandson, stated on his enrollment application (authorized by the 1928 California Indian
Jurisdictional Act) that his “Grandmother and Great Grandparents were San Luis Rey Mission Indians.” The Record of Decision incorrectly concludes that “the correct tribal ancestry of Paulina Hunter was San Luis Rey” and therefore not Pechanga Temecula.

Posted by OPechanga at 5:40 PM