We are reprising a set of posts from 2008, from the Manuela Miranda Family of Pechanga, when fewer people understood what disenrollment was doing to Native people. 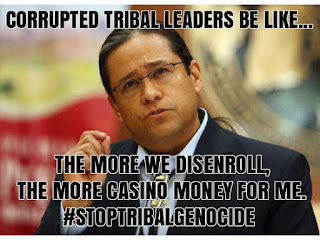 People say, "why don't you ask the Native American Rights Fund for help? Well, we have, they told me the "didn't do Indian vs. Indian". Shamefully, NARF has the leader of a disenrolling tribe, Pechanga Chairman Mark Macarro on their board.       Read on.....

Why this installment regarding the Splinter Group starting with a quote about Hitler and the Nazis. Well, if you have not noticed, there is a new era of genocide rolling through Indian Country. This genocide is not at the hands of the Spanish government, nor a policy of the US government.

This new genocide is being carried out by non-Indian people masquerading as “TRUE” Indian people, and “LEGITIMATE” Indian people under their control who have lost their way and turned their backs on their brothers and sisters.

Most people believe the word “genocide” means the actual physical killing off of a group or race of people. Genocide also refers to actions which attack the culture, soul, and mind of the people. Disenrollment is a pure example this.

The recent actions of the Splinter Group, and similar groups throughout Indian Country, are representative of those deeds of Hitler and the Nazis.
Even before the Nazi Party rose to power, the Jewish people were blamed for the ills that had befallen a once mighty Germany. The Jews were characterized as all that was wrong with government and business, and through their destruction, through the purification of the German people, Germany would once again be strong. 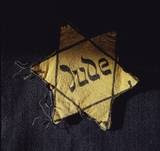 “people are plotting to take control of our government…”
“…the true Pechanga people are still a majority of this Tribe!!!”

The families the Splinter Group targeted for disenrollment were the reasons that their “…sons and daughters, will never get the opportunity and privilege to serve our government…”
The targeted families were responsible for stripping away their rights as the “TRUE Pechanga people”.

By de-humanizing the Jewish people and those targeted for disenrollment, the Nazis and the Splinter Group succeeded in segregating their victims and justifying the acts of genocide as a purification of those less than the true people.

People who were once friends, acquaintances, business partners, and even family, turned their backs on those targeted. Fear reigned.

Don’t talk to them or be seen with them…you could be next.
Don’t attend their meetings or go to the Gathering. Those who attend may lose their jobs with the Tribe…or worse.

Who is next on the Splinter Group’s list? Ask the Enrollment Committee. They got a copy of the list. Hopefully those who are not members of the Splinter Group aren’t afraid to talk.
Are places within Indian Country turning into neo-Nazi regimes? Is it really that bad?

Ask those who have been disenrolled or targeted for disenrollment.

Ask the Chairperson of the Pechanga Enrollment Committee why she thinks her house was shot at and who she thinks did the shooting?

What is it going to take? How many are going to be “killed off” before something is done to stop this genocide?

Those who fail to help or stand up against these genocidal actions are as much to blame as those who carry them out. They say ignorance is bliss, but nobody can say they don’t know what is going on. They know. However, as long as they are not the targets, as long as they reap the financial benefits, they will continue to deny the truth.

All our brothers and sisters will be gone, and those who did nothing to help them will be left to fend for themselves. Look around, are you the person Martin Niemoller spoke about?
There is much to think about…there is even more to do. Our ancestors our crying out…we must heed their call.

This will close with quotes by Benjamin Franklin and by former slave Frederick Douglass:

“Look upon your hands! They are stained with the blood of your relations.”
Benjamin Franklin spoke these words in response to the government’s policy towards the Native Americans.

Douglass wrote: “Whatever may be tolerated in monarchical and despotic governments,” Douglass wrote in 1866   “no republic is safe that tolerates a privileged class, or denies to any of its citizens equal rights and equal means to maintain them.”   OP: This fits with the tribes that allow corrupt chairman like Macarro of Pechanga and Smith of Pala, to skirt their tribe's constitutions and the will of the people.

Unfortunately, they are as true today as the day on which they were spoken. The only difference is, the United States government has been replaced by the likes of the Splinter Group and those who deny the truth.

NEXT UP in this series:    “The True Cost of Indian Casinos and Tribal Disenrollment.”  and costs are NOT ALWAYS in money...

Posted by OPechanga at 3:30 PM

Sad TRUTH, but well published. The sad truth is, stripping others of their families history and shunning them while you do it is apartheid.The ignorance and closed hearts of the people who can do these things is unfortunate, but there is the creator looking down always. What is the real ending to the story? Hopefully we can ALL find peace and harmony and pass it on, generation by generation forever!

Pechanga, the Federal Government has several oral depositions giving by Pechanga tribal elders and certified and recorded by the federal government on Paulina Hunters 19.88 acre Allotment and her heirs. Why would you ignore the TRUTH from several elders who shared it? Some of those elders are from your families. Is it custom and tradition to ignore recorded history? I'm sure our elders deserve to be honored from ALL members.

According to the Pechanga bylaws and custom and tradition, the voting band makes ALL decisions. Russell "Butch" Murphy is a good example, right "Butch"? A man who voiced his own opinion of what "Pechanga" is. He even had to go to the band and ask to be a member once the bylaws and constitution became tribal law and the band voted and accepted him as a member.

30yrs later the band was asked to vote on the disenrollment policy that was being used. The band again spoke. The band voted to stop using the policy and ALL member enrolled from that date forward would ALL be members. THE BAND SPOKE again! Unfortunately the band was dishonored and 130 members were disenrolled even after the band SPOKE CLEARLY.

The band CLEARLY ignores it's recorded oral tradition, it scared to death that it could happen to them next if they disagree or try to honor the TRUTH.