Stories like this can lead to MORE STORIES on Tribal Disenrollment in Native American tribes. 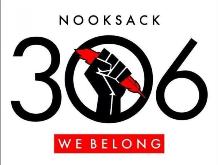 NPR: The NookSack Tribe and clinic would not return interview requests, but the federal government says Alexander should have never been denied tribal health care. That's because disenrollments happened after the NookSack council failed to hold an election when many of its seats expired. Because the tribal government lacks quorum, the Department of Interior says the tribe does not have a government. And the feds aren't recognizing the disenrollments.

Posted by OPechanga at 9:56 AM