Lisa Jimenez, disenrolled from the Wilton Rancheria has this insightful message of the current Black Lives Matter controversies/protests in the news. Tribes are scrambling to get message out of unity with our black brothers and sisters, yet are guilty of some of those same abuses.   Here's Lisa's statement 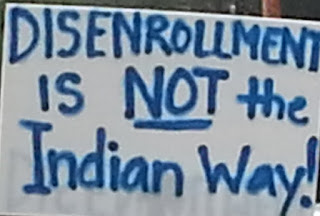 Tribes have been posting unity and equality messages in response to recent events around the BLM. The message is important and something we all need to stand behind. Inequalities of black, brown and indigenous peoples have been shaped by institutions of this country. Unfortunately, the inequalities and power mentality transferred to many tribes themselves. Positioning and politicking to cancel their own family members out of a tribe for their own greed.


I believe this is a new time in our world. I’m optimistic that the tribal leaders who wrote the unity messaging stand behind their words. I’m hoping it’s a sign of things to come including the inclusion of the disenrolled and historic families. Restore what is right. We belong.

Pechanga tribal chairman Mark Macarro had his jackbooted thugs pull my black cousins out of the tribal school. See VIDEO HERE He practices apartheid and segregation in his reservation.

The Confederated Tribes of Grand Ronde, which disenrolled nearly a hundred living tribal members, until tribal courts forced them to follow tribal law and reinstate them came out with a message of support you can read here.

At times, confronting these injustices can seem too daunting of a task. But our ancestors who were targeted by the anti-Indian policies of the Federal Government guided us through our own struggles. They taught us that there is strength on the other side of this struggle. There is hope when we all stand together. We are all someone’s son or daughter. Many of us are mothers and fathers. But most importantly we are all human.

The Grand Ronde were GUILTY of anti-Indian policies such as disenrollment.
Pechanga, Pala, Nooksack, San Pasqual, Redding, Cherokee ALL are guilty of these abuses. To name a few that have harmed 11,000 LIVING Native Americans.

IF Tribes STAND against the abuses of our black citizens, they should DO THE RIGHT THING and bring ALL their people HOME.

Posted by OPechanga at 9:09 AM

I agree with 100%. As a White Caucasian I believe"All Lives" Matter. I had no idea that there was a rift in the Native American community. That shouldn't be . You should be all one people, and stand as one people. Your Elders should do the right thing and bring every back together. The old adage: United we stand divided we fall.