How The REAL San Pasqual Tribe was ABUSED by the BIA 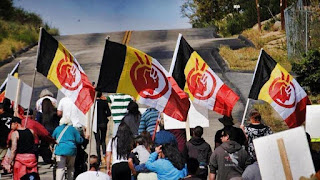 This petition is five years old, which is NOTHING in the time frame of abuse of Native Americans by the BUREAU of INDIAN AFFAIRS.  This information from attorney Alexandra McIntosh explains how the BIA took advantage of REAL Indians to install white interlopers in power.  You can learn more, by using the search bar on the upper left of this page for San Pasqual.

- It took hearings before the California Legislature in 1955 to get the true San Pasqual Indians on to the land that was trust patented to their tribe by Executive Order in 1910. The true San Pasqual Indians were not allowed on their own land by non-San Pasqual squatters, who were on the San Pasqual land with the tacit permission of the Bureau of Indian Affairs.
- The Bureau of Indian Affairs breached it’s fiduciary duty to the San Pasqual Indians, both by intentional acts, as well as grossly negligent acts, relating to both the land and enrollment. The Bureau enrolled non-San Pasqual people in the San Pasqual tribe over the objection of the true San Pasqual. The Bureau has breached in fiduciary duty to the true San Pasqual descendants for their failure to give due process notice to the descendants relating to their 2005 enrollment in their tribe.
To understand the importance of this petition, you have to understand a brief history of this tribe:
At the end of the Mission period, the San Pasqual were returned to their ancestral land. The San Pasqual village grew up around some of the best farming land in San Diego. In 1821, the Mexican governor confirmed their land to them and assured them they would never be disturbed. One of the reasons the San Pasqual are considered the most important Indian tribe in California history, is because of the assistance they gave to General Kearney during the Battle of San Pasqual. After Mexico ceded California to the United States, promises were made to these Indians to assure them they would never be disturbed and they would be safe on their land. However, with the California gold rush came the white 'pioneers' who looked upon the Indians as sub-human.
In the 1870's, a man by the name of Calvin Washburn set fire to the San Pasqual village and burned the San Pasqual out. A man by the name of Bevington obtained orders of ejectment in the San Diego Superior Court in 1878, and the San Pasqual were removed by the government from their land. They dispersed to the hills above their village, some went to the Escondido area, only a few miles away, and others around California. It took until 1910 for the United States government to set aside land for their reservation. (According to March 10, 1910 article the San Pasqual Indians were the ONLY California Indian tribe without land).

The San Pasqual Indians wanted their own land back. However, the government would not disturb the white 'pioneers.' The land ultimately set aside for the San Pasqual was in another township, had no water and did not have arid land for farming. Therefore, the proud San Pasqual Indians refused to move on to the worthless land. While the land was not valuable to the Indians, because they could not farm and sustain themselves, it was valuable to squatters. Therefore, in 1910, a descendant of one of the white pioneers, Frank Trask, was hired as a caretaker of the San Pasqual land to preserve it for the Indians. In an ironic twist of history, the descendants of Frank Trask became the very squatters he was hired to prevent coming on to the land.
Frank Trask had married a half-blood woman from the Mesa Grande tribe in Santa Isabel. They had 2 daughters, Florence and Helen. The 4 of them moved into the little house that was on the land. Frank Trask died in 1920. After his death for a period of time his family continued to live on the land. However, in time, they moved away. The Bureau, however, continued to count them on the San Pasqual Indian census rolls. (Throughout the 1920's with a notation, they were Mesa Grande Indians). There are 2 certified copies of documents from the National Archives that document the Bureau of Indian Affairs KNEW Frank Trask was NOT an Indian; and that none possessed San Pasqual blood.
In 1937, the County of San Diego conducted an extensive study about the Indians on the 18 San Diego Indian Reservations in the County. It was an extensive study that looked at health, education, crime, etc. It was documented that there were no San Pasqual Indians on the reservation. Counted, however, were 8 non-residents (The Trask daughters, and their families).
In 1955, hearings were held about the California Indians by the California Legislature. During the hearings, it was discovered that the non-San Pasqual people would NOT ALLOW the San Pasqual Indians on to their own trust patented land. The Bureau of Indian Affairs Regional Director, Sacramento, testified. It was clear that he knew the story of the San Pasqual Indians, and that the non-San Pasqual Indians had no rights to be on the reservation and keep the San Pasqual Indians off of their land.

Thank you so much for this post brother. This is truth And by the way,The tribe is mostly white now, they took out mostly all the natives The main document
Manipulater is Tilda escalate green..who is non indian... And recently Robert Bishop got caught stealing funding from the tribe. The sheriffs are corrupt and white and fat. So is that gene loucks a sheriff.. whose a member of the German KKK ..it's in historical file and the tribe is content with the casinos stipends. But when the president decideds to remove casinos ..it will be victory..all the frauds will go back to thier cities and cry's.