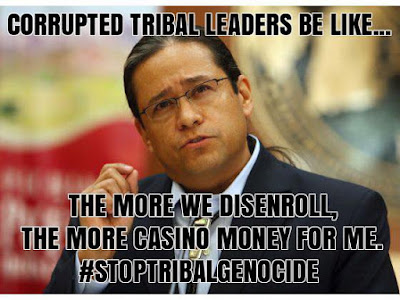 That strict adherence to population never works well for Indian Country, particularly for California tribes," said Macarro, who said that "one of the ironies" of the pandemic is that his tribe's population has historically been "absolutely decimated by disease."
PECHANGA has been DECIMATED by DISENROLLMENT at the hands of MACARRO and his tribal Council!  25% of Macarro's tribe was wiped out by, NOT DISEASE, but disenrollment this century.

Pechanga Band of Luiseño Indians tribal chairman Mark Macarro said he and his tribe were "astounded" by the amount of funding specific to tribes in the law but added, "This is probably one of the least clear deliveries of federal dollars that there really ever has been."

Some of the money was distributed based on the housing data starting in early May, but not knowing when all the funds would become available made it more difficult to cope with the sudden revenue loss from the mid-March shutdown of the tribe's Pechanga Resort Casino in Temecula California, and played a role in the tribe's decision to reopen the casino again on a limited basis on June 1, according to Macarro.

"What did help push us along was the lack of certainty of the funding not having been received from Treasury, the delay and the big unknown," Macarro said. "And frankly, the fear that the amount received at that point by my tribe and many others in California because of our small populations was so paltry, were we even going to see anything that approached a level of helpfulness in the next round of distribution under CARES? And a lot of tribes said, 'You know what, we need to get open.'"

"It might have made a difference of a month — maybe we could've looked at July instead of June," Macarro added, noting that when the decision was made, the virus also appeared to be ebbing in the region of the casino, which is on the tribe's land in Temecula, California, north of San Diego and southeast of Los Angeles.

And even with most of the funds finally being delivered by late June, Treasury's lack of specificity about just what the funding is meant to cover could mean tribes won't get reimbursed for everything they spend it on, which they must do in the short window before the end of 2020, experts say.
Posted by OPechanga at 3:41 PM

Disenrollment is not honoring all members of the band or our true ancestors who created ALL. Ignore custom and tradition is not acceptable to everyone.