While moronic posters try to pull down statues of people unconnected to slavery or racism (Stevie Ray Vaughn) The CATHOLIC CHURCH, which erred in beatifying Junipero Serra, gets it right 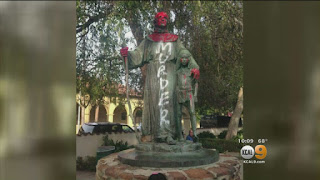 The Catholic Church abruptly removed a long-standing statue of Junípero Serra from the San Luis Obispo Mission on Monday, amid a reassessment of the missionary’s controversial history that includes abuses against Native Americans.

The statue was brought down by a work crew at about noon Monday to “safeguard the statute and to protect it from vandalism,” a spokeswoman for the Diocese of Monterey, which owns the Mission property, said Monday.
The statue’s removal follows weeks of protests against systematic oppression of ethnic minorities. Similar statues of the Catholic priest have been toppled by protesters in Los Angeles and San Francisco.

Posted by OPechanga at 3:58 PM