UPDATED Wilton Rancheria and City of Elk Grove Celebrate CASINO Prematurely. The Issue is NOT Settled at ALL

While the City of Elk Grove and Mayor Steve LY are mesmerized by dollars signs from the proposed Wilton Rancheria Casino, it seems the champagne corks they are popping is a tad...premature.  As we see in this letter: 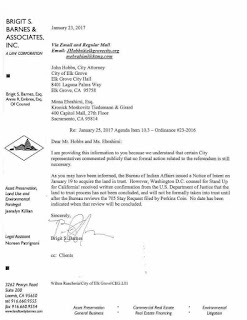 What the city doesn't mention that the issue is FAR FROM SETTLED. Why would the city MISLEAD their citizens?  If they start lying NOW, wait until later, when they talk about traffic concerns, "no significant increase" in criminal activity and it's good for us.

The Wilton Rancheria is already accused of fraud by their own people, and GET THIS:   In 2009, the city of Elk Grove and Sacramento County contested a federal lawsuit by the Wilton Rancheria that led to restoration of its tribal status.  That seems to be an AMAZING change of heart, citizens should ask, WHAT CHANGED?

We've written about the BIA Director Amy Dutschke's family ties in this issue, so, do you believe in ...coincidences?  And Leprechauns?

If the casino is built, the Wilton tribe has offered to pay more than $56 million over 20 years ($2.5 million per year?) to Elk Grove’s general fund, plus more than $36 million for police and code enforcement services and more than $26 million for road improvements and maintenance and community facilities. In addition, the tribe would pay more than $8 million to the Elk Grove Unified School District and other money to nonprofit community groups and programs.  IF this is the tribe's OFFER...how much do you think they REALLY could afford to pay?

Stay tuned for more information, but citizens need to be aware that the Wilton Rancheria has harmed their OWN people, what makes you think they won't lie, cheat AND steal from....not tribal people?

The wholesale migration of members of the Ione Band of Miwok Indians to membership in the Rancheria, including many relatives of Regional Director Amy Dutschke—necessarily calls into question the basis for that restoration, and the BIA’s administration of initial membership eligibility determinations.

Posted by OPechanga at 2:13 PM

I hope Elk Grove properly states the limited waiver of sovereign immunity required to make these promises of payout binding. There have been some very dodgy Tribal Gaming Ordinances approved by the NIGC with nebulous tribal entities operating licensed gaming establishments and claiming sovereign immunity. These "nebulous" tribal entities are basically fronts for tribal committees, or even the tribal committees themselves illegally acting as owners of casinos while pretending to represent the tribe. If the waiver of immunity is in the tribe's name but the casino is owned and operated by an entity other than the tribe that claims immunity, the city will be out of luck when the payouts aren't made and they can't sue.

As a Sacramento resident, and a member of a gaming tribe, I feel that it is imperative that the city of Elk Grove work with the legal tribe in the area. If the tribe is accepting membership from people not related, and disenrolling members when they don't have a casino,then what are they going to do with the money from the casino? They SHOULDN'T be legally allowed to have one. Indian gaming can be beneficial if used correctly, and with good leadership. I should know. However, the BIA needs to be cleaned out, so they can help get corrupted tribal leaders and councils out of office, and help hold tribes accountable to their own constitutions. This is BS. I won't stand for tribes harming their own ppl. I won't stand for this casino until Wilton gets themselves right.

"There has been a lot of confusion and misinformation about the casino, the city's role, whether we get to vote or should get to vote. Unfortunately some of this misinformation is intentional and some of it is laziness on the part of casino opponents and the media. The city has a casino fact sheet on their website that addresses most all of the issues. Whether you are for or against the casino you should read this. If you think there should be a vote on it is different than what the reality is. The fact is that there can't be a vote on it. Even if the city council wants to. Even if the residents want to. There have been complaints on here and at the council meeting that the council is not listening, and that they need to put this to a vote. Legally they cannot do that. They don't have the jurisdiction. The Federal Government through the Bureau of Indian Affairs makes the decision on the land. The city council has no say in the matter. Zero. Once the BIA approves it, then it goes to the state to approve the gaming compact.
You're probably thinking what about the petition? The petition was on a decision by the council to remove the casino land from the development agreement that included the mall. That did not approve the casino. The petition seeks to force a vote to overturn that decision. According to the BIA, that decision is irrelevant to the process and has no bearing on the process. Here is a direct quote from the BIA: “the Development Agreement does not prohibit the BIA from approving the Tribe’s trust application…”."
https://www.facebook.com/elkgrovelagunaforums/posts/10154900860335350

Amy will make sure it is approved so she and her family can run a Casino and get rid of the real Wilton Natives. Be prepared for disenrollments once the Casino starts profiting. She is the disenrollment queen.