Saginaw Chippewa Disenrollments: Statement from the Disenrollees: We are WATCHING - We Remember

We have received information and requests to be published some pertinent information regarding the SAGINAW CHIPPEWA Tribal Disenrollments, as well as the 1982 BASE ROLL of which some current members in control can't seem to be traced to.

We're seeing this more and more, adopted tribal members gaining power and then stripping the citizenship of true blood members 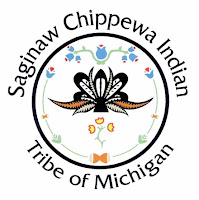 NINA WIND MIK WEN DANA-
NINA WIND NANA GATO WABME..
(The fakes and imposters may not know it means: We are Watching and We Remember)

The Saginaw Chippewa Tribe of Mt. Pleasant, Michigan is currently and have been disenrolling lineal descendants of historic members. Chiefs, headsman, medicine men, people who fought and died for the very land promised to them by the United States and other government entities.

Our ancestors were lied to by the BIA and the United States Government, denied land allotments, imposed treaties and constitutions. Denied basic rights guaranteed under the constitution.
The Saginaw Chippewa Tribe and the Tribal Council profess to want to follow the constitution and to remove non-members.

The following are examples of how well they follow the rules and how corrupt they are:
Tribal Constitution of 1986-
Article III Section d-
No person adopted into the tribe shall be eligible to hold the office of Chief, sub- chief, tribal secretary, tribal treasurer or tribal council member.
Violation -
Current Tribal Chief- Frank Cloutier (adopted member)
Other adopted members have held one or more of these positions.
Ordinance 14-
Changed over 50+, dating from Feb. 2,1987 up to as recent as Oct. 10, 2016. The last resolution was done 5 days after the first set of current disenrollments.
These are resolutions only, amendments must be approved by the Department of Interior. Therefore the Tribal Council can make changes at whim.
NO LIMITATION PERIOD-
There is no longer a statue of limitations on any disenrollments, regardless of the basis for the proceeding.
No membership is safe, EVER!

According to a James Mills Report dated September 30,1998. Any member on this roll does not have to prove they trace to any roll.
The chiefs that signed the treaties of 1855 and 1864 for the land that is now the Isabella Reservation do not constitutionally trace to any of the assigned rolls of 1883, 1885, 1891 and 1982. Therefore they are not considered to be Saginaw Chippewa.

The list provided is a small portion of the people adopted to the 1982 Base roll. Many of these people do not reside on the Reservation, some are deceased and never lived on the reservation, some were deceased long before this Roll was ever established.
Saginaw Chippewa BASE ROLL Pt.1 by Original Pechanga on Scribd


You can find PART TWO HERE and PART THREE HERE

Public Act. 99-346
Was established as a Judgement Funds Act for the Saginaw Chippewa Tribe in 1986.

The Tribe was released funds under certain stipulations, one of those stipulations is a non- discriminatory
clause, which they have violated repeatedly by targeting and discriminating against certain membership that
enrolled under an open enrollment period.

Grandfathers Teachings
The Tribe professes to follow theses teaching and to protect their culture. It is evident in the way they conduct
themselves, they know nothing of their culture or of their ancestors. When you do not acknowledge the Chiefs that signed for the Isabella reservation, the hardship of our ancestors , your culture, the meaning of what it is to be Anishinabe you are lost to the Wiindego.
Chief Cloutier and current Tribal Council members:
You bring dis-honor to our ancestors who sacrificed so much to ensure that our people would endure.

Please read the following reports and Books on the Saginaw Chippewa Tribe:
The Gulig Report
An Historical Analysis of the Saginaw, Black river and Swan Creek Chippewa's Treaties of 1855 and 1864
By:   Anthony Gulig, Ph.d July 30, 2007
Supreme Court reversal of Carcieri Implications for Reaffirmed Michigan Indian Tribes
By: Novaline D. Wilson May 7, 2008

Diba Jimooyung Telling our story- A History of the Saginaw Ojibwe Anishinabek
Go to the Ziibiiwing Center and ask to read the archives relating to the Saginaw Chippewa Tribe, the true
history of the Tribe!!
RISE UP & FIGHT HISTORIC MEMBERS OF SAGINAW CHIPPEWA TRIBE!
Posted by OPechanga at 4:24 AM

The original land Allotment rolls of 1883,1885 and 1891 are the rolls in the original 1937 Constitution that you needed to trace to in order to be considered for membership. The constitution was amended in 1986 in which the 1982 Base Roll was added, why? Well because they knew a very limited few could trace to the earlier land rolls. The 1982 Rolls consist of people that were dead long before the roll was compiled, non-natives (no indian blood), people that never lived on the reservation or people that got an address on the reservation just to make the list. Mean while the Tribe targets the true blood members, denying them due process, violating their civil rights, denying them access to health care, denying them any rights to membership. When you deny the descendants of Chiefs who signed for the Isabella Reservation you have no right to call yourself a SAGINAW CHIPPEWA!!
The ANCESTORS are watching!!

When you have a kangaroo court and a system that is corrupt you have WHITE INDIANS IN CHARGE!!
And then you have lawyers who set up the Office of Administrative Hearings, families hire her and then she drops the ball on their cases or should I say the Tribe paid her to drop the ball. I think her husband is on the 1982 bogus base Roll. Hmmm.....
Oh and for the ones that say " where were you when they set up bingo"and "its all about the money", well if not for my 4X Great Grandfather signing the treaty for the Isabella Reservation you would not have Bingo to play and no money to waste. Learn your history and respect the culture!!