Natives NOW Concerned About Possible TERMINATION Because of TRUMP? After being AWOL on Disenrollment.

REALLY, now that TRUMP is President, (don't say WE didn't warn you) here comes the concern about loss of federal recognition?

Where the f**k you been? 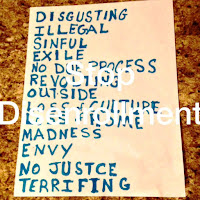 While THOUSANDS of us have already been TERMINATED via disenrollment. And tribes were wielding sovereignty like a cudgel to bludgeon the opposition, where was the concern?

Counter Current has this story up:


Saglutupiaġataq’s administration apparently began mobilizing to pursue the privatization of Indian lands as early as October 2016 with the formation of his 27 member Native American Affairs Coalition. The Coalition is chaired by “Cherokee” pretendian Rep. Markwayne Mullin. Like the termination policy of more than 60 years ago, the Coalition contends that impoverished tribes are saddled by federal regulations that stymie self-reliance and prosperity. Tribal lands should be privatized, it argues, so that American Indians can pursue development projects that lift them out of poverty.

The termination era of 1953 to 1968 shows us that tribal lands and thus tribal governments, peoples, and cultures remain vulnerable to the whims of Congress. There is a strong possibility that American Indians may soon be fighting against a renewed and calculated assault on their political, cultural and spiritual existence.


Be vigilant for ALL abuses, not just from our blowhard President.  Stand up for THOSE who have been harmed by their own tribal councils.

Now that would be great karma.

There are a bunch of lobbyists with dollar sign in their eyes after this announcement. Do you think gaming tribes are going to risk losing their casinos over this?

Trump should shut down all these crooked Indian casinos, like he put crooked Hillary in her place.

It would take an act of Congress to close the Casino's.
Trump is just a Crybaby with bad hair.

Shit them down they have hurt many people. Including me. Financially. Robbers and rip off those dam Indians.Biggest gaming scams ever!!!,
The disgust me. And losing so much making your casino host rich what a joke...

In time this pechanga will get the boots,

MAJOR GAMING RIP,OFF.. ESPECIALLY 5$ 10$ And up as well as those poker machines they are a total corrupt scam!,,
Pechangas the worst.. they will steal your last dime..