The event will draw attention to the growing number of human and civil rights violations occurring in Indian Country. The violations, which include the denial of such basic rights as due process and equal protection, have contributed to the growing number of disenrollments, banishments, and denial of membership that have swept through Indian Country.

This protest is sponsored by descendants of The San Pasqual tribe, which has denied membership to a family due to a miscalculation of blood quantum, which protesters say they refuse to correct.  Injustices like this are not unusual since the advent of tribal gaming.

In California alone, nearly thousands Indian people have been stripped of their tribal citizenship since the approval and expansion of Indian Gaming in 2000. Additionally, thousands more have been denied their birthright as tribes close their roles in an attempt to limit the number of those who benefit from Indian Gaming. 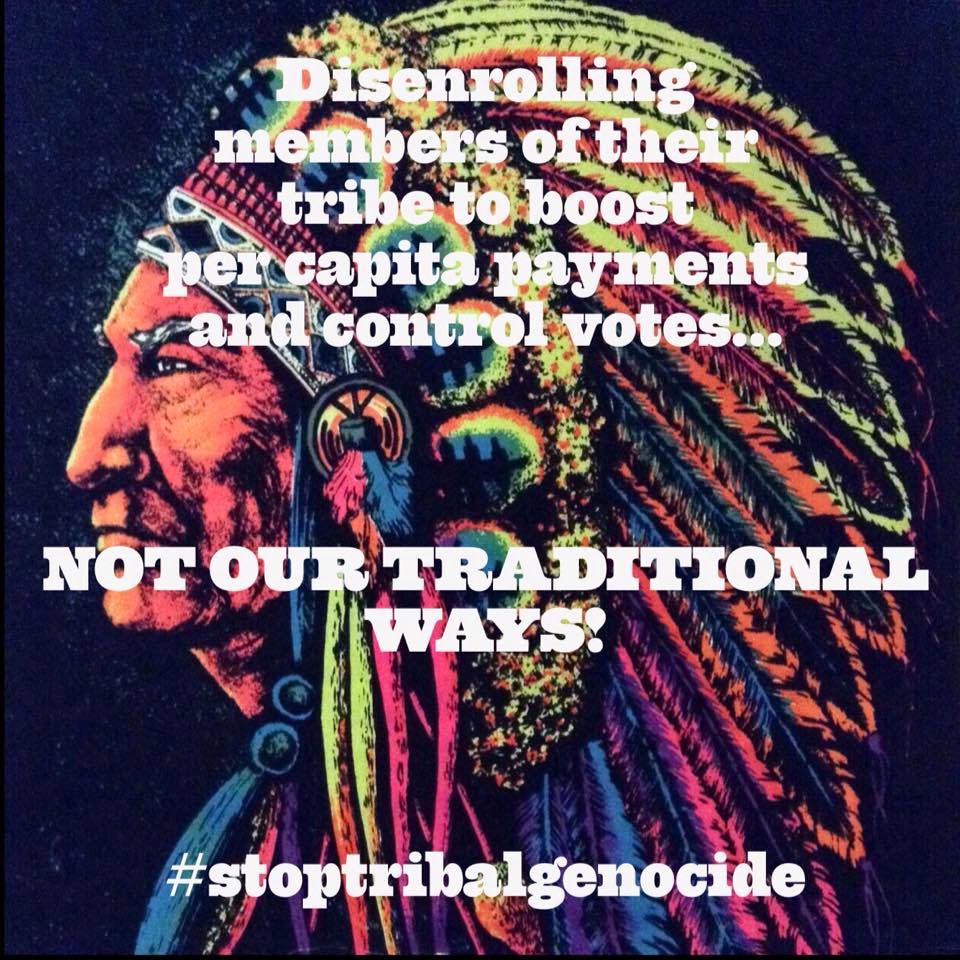 JOIN US in protesting for the rights of Native Americans stripped or kept from citizenship in their tribes.  And there is a SECOND Protest:

Interior needs to stand by its 1989 administrative decision on the full blood status of Margarita Britten!

Csino tribes have become greedy and are becoming racist. this should not be allowed. love goes where it goes as they should know. our ancestors would be ashamed of them and this surely isn't following the red road. this was to help the entire tribe , not cause genocide among them. i have to wonder if any of those in control have under gone the blood quantum dna tests. very shameful and karma will get them

Not all tribes use blood quantum. It's the white man's use of it that has helped destroy Indians. Corrupt tribal councils are just exploiting that.

A question for the lawyer (see Sepulveda-Barraza 645F.3 at 1070. authentication of Certificate )

The courts have ruled tribes can't change CDIB's . Is this case a blood ?

The corruption of these tribes will not stop. No entity has control over any tribal government except themselves. Unless a tribe misappropriates US government funds or fails to pay taxes, would be the only reasons the US government would take action.

First of all, it is NOT true that no one has power over corrupt tribes. Look at the Soboba tribe. Tribes MUST follow Federal Laws. The FBI and the US Attorney can indict. The question is will they. It is NOT true that the BIA has no power. Under 25 CFR 48, the Bureau of Indian Affairs has all say over enrollment in San Pasqual. Frances Muncy and the BIA are destroying that tribe by filling it with imposters!

Frances Muncy you fricked up pechanga also damn it! And elsie Lucero!