As word came out yesterday, that there will be NO Civil Rights case in the shooting death of the cop attacker Michael Brown in Ferguson, MO, we remind the American people that we have been asking the Holder Justice Department and the Civil Rights Division to look into civil and human rights violations in Indian Country for years. 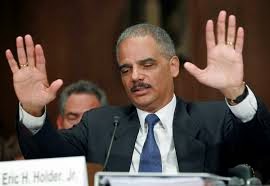 Read about those instances:One Death in Missouri.. and here in Eric Holder to Resign.. we included a letter to the Attorney General.

What is it about Holder?  Is he all flash and no substance?   He got America all riled up thinking he would get a civil rights case against George Zimmerman too, after he won his self defense case in the death of his attacker Trayvon Martin.   Another EPIC FAIL, ERIC.   The failure was not in NOT finding civil rights abuses...but in trying to pull the wool over our eyes in saying that there were.

Just GO Mr. Holder, anyone is better than you.  But again, here is a letter for your successor, since you are incapable.
The Honorable Eric HolderUnited States Attorney GeneralDepartment of Justice Building950 Pennsylvania Ave. NWWashington, DC 20530

Dear Attorney General Who Succeeds Eric Holder:
I respectfully submit this letter urging the Department of Justice Civil Rights Division to commence a full-scale investigation into the gross civil and human rights violations which have infected Indian Country.
Throughout Indian Country, tribal officials have taken actions which have denied and/or stripped thousands of individual Indians of their rights and privileges as tribal members and denied them access to federal benefits and programs in the areas of housing, education, health, voting and public works assistance.  Pechanga, Pala, Redding, Snoqualmie, Nooksack, Chukchansi, Enterprise, San Pascual are just a few who have terminated the rights of their people.
In some instances, the illegal actions occurred decades ago, however, there has been a marked increase since Indian Gaming has evolved into a multi-billion dollar business. Tribal leaders justify their right to systematically deny and/or strip basic rights and privilegesfrom their citizens under the guise of tribal sovereignty.   The time is right for your department to use it's full force on the corruption that has spread throughout Indian Country.
Tribal leaders have routinely committed acts to deny Indian individuals due process; equal protection of tribal, state, and federal laws; property interest rights; and voting rights. Theses actions have been carried out in gross violation of tribal and federal laws, such as the Indian Civil Rights Act of 1968, which were specifically enacted to guarantee and protect the rights of the individual Indian.
Using sovereignty as a club to beat the weak and render them helpless is abhorrent.The federal government can no longer allow the offending tribes and tribal officials to claim that this is a sovereignty issue that rests solely within the domain of tribal courts and tribal law. Few Tribes actually have tribal courts.And, in most cases, the tribal government officials responsiblefor the violations of law are the very same people who pass judgment as to whether or not lawshave been violated - they are the judge, jury and alleged criminal all rolled into one
.
The United States has a trust responsibility to the thousands of individual Indians whose basic rights have been infringed upon. Unfortunately, the Bureau of Indian Affairs has determined that their trust responsibility extends only to the tribal government and government officials and not to the thousands of individual Indian victims. Therefore, I believe that the DOJ has the legal and moral responsibility
to investigate and prosecute such violations of basic rights.
I urge you to direct the DOJ Civil Rights Division to initiate an investigation into the growing number of human and civil rights violations described above. In addition, I hope that any investigation would not be short-circuited by those who would claim tribal sovereignty as a justification for inaction.
Nor should justice be denied as a result of political wrangling by politicians fighting to protect their tribal “clients” who funnel millions of dollars into their campaign coffers.
Posted by OPechanga at 8:35 AM