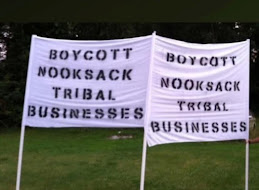 The Nooksack 306 are beginning to put together a boycott of Nooksack businesses.  Actually, it's in response to the Nooksack's treatment of their elders, whom the tribe has stripped of their free meals. Recently the tribe has refused service to some N306 people, even placing then on a do not serve list.

I wrote this piece quite a while back, and I think it's time to resurrect the idea of a BOYCOTT for all tribal entities that have violated the civil and human rights of their people.  The State of CA was working to boycott neighboring state AZ businesses a decade ago, because of the tough immigration laws that hadn't even take affect. Yet, these same entities won't stand up for tribal people that have actually been HARMED by their tribes.

WHAT DO YOU THINK, shouldn't WE take a stand against the abuses of civil and human rights by these tribes?  Please share on social mediaA boycott is a form of consumer activism involving the act of voluntarily abstaining from using, buying, or dealing with a person, organization, or country as an expression of protest, usually for political reasons

California Indian Tribes like: Pechanga Band of Luiseno Indians (Temecula), Redding Rancheria (Redding) Picayune Rancheria (Coarsegold, near Fresno) and the Nooksack Tribe in Washington state are just a few of the tribes that do not deserve your patronage.

Here is what the gaming tribes mentioned, as well as others told within this blog have done to members of their tribes:
FORCED a family to exhume the bodys of ancestors to prove lineage, then ignored the findings
•Stripped tribal members of their citizenship
•Denied voting rights to members
•Taken away rightful healthcare to seniors
•Blocked access to land on the reservation
•Denied members due process of law, including legal representation, even writing tools.
•Prohibition of practicing religion, including the right to pray at their ancestor's graves.
•Threatened others if they speak out
•Subjected some to ex post facto laws.
Many will say that "well, they are sovereign nations, they can do what they want". Of course they are, and Arizona is a sovereign state that passed its laws through the democratic process too. Remember, South Africa was a sovereign nation too, they had the right to denounce Apartheid as a policy. But in the tribe's case, many or most have acted OUTSIDE their own constitutions. Just as the boycott of South Africa worked to eliminate apartheid, so can boycotts work to show these casino tribes that "violations of civil rights don't pay".

Many have said, "why should we care? It's just a small tribe". These money making tribes are using money stolen from tribal members to influence politicians. And tribes like Pechanga tried to keep Californians from exercising their RIGHT TO VOTE on their expanded gaming propositions, with the Feds help. And to put it in perspective, the sovereign nation of the Picayune Rancheria eliminated almost 50% of the tribe. That's equal to eliminating 16 MILLION in California's population. Pechanga eliminated the equivalent of 8 million citizens in order to increase per capita payments and to control votes.

Posted by OPechanga at 8:11 AM