Nooksack 306 Evictions DELAYED Due to Bad Weather. Chairman Ross Cline Vows the Elderly WILL BE EVICTED

Not because it was to protect the elderly residents from the planned eviction, but because the jack booted tribal police couldn't brave the snow and ice, according to the N306's tribal attorney Gabe Galanda 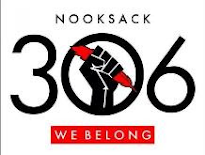 Tribal Chairman Ross Cline confirmed in an email to Indian Country Today on Wednesday that the recent poor weather appeared to have delayed the eviction process but didn’t say how long he expected the pause to last.|

Read about the evictions here   The concerns prompted the federal Department of Housing and Urban Development to first ask the tribe to delay the evictions in September. That same month, HUD recommended the Department of Interior launch an investigation.

Since then, other federal agencies, including the Bureau of Indian Affairs, have pressed the tribe to delay any eviction proceedings until the Department of the Interior completes its investigation and determines whether the tribe is violating civil rights or other federal laws in moving forward.

Posted by OPechanga at 5:59 AM

Mr. Ross Cline,
Anyone can dress to look like an Indian but a real Indian has an Indian HEART.
I do not believe you have an Indian heart.