Can FAWN SHARP, NCAI President Speak Out on Disenrollment When She Has Disenrolling Chieftain Mark Macarro As Vice President?

Secure our traditional laws, cultures, and ways of life for our descendants.

MISSION STATEMENT of the NCAI


We thought we had a coup, when Redding Rancheria disenrolled Cam Foreman got National Congress of American Indians President Fawn Sharp to release a statement on disenrollment, after Cam got Secretary Deb Haaland to mention that in a public forum.

I was pushing hard to get more, so hard, that President Fawn Sharp BLOCKED me on Twitter (@opechanga). 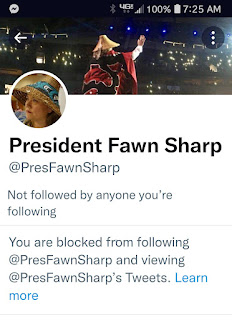 Stifling discussion by blocking
those who expect Fawn to LEAD?
The outrageous behavior that got me blocked?  Calling the NCAI and Fawn Sharp out for their lack of action in standing up for the over 11,000 Native Americans who have been harmed.  I did that when she ignored us in her State of Indian Nations speech.  Just as I've done with each President of the NCAI over the last decade and a half.
Now that Mark Macarro, the tyrannical chairman of the Pechanga Band of Luiseno Indians is First Vice President, can Fawn Sharp cast a stone at the man who abuses his own people, runs an apartheid state, stifles discussion on the two major disenrollments at tribal meetings?   Wouldn't that BE THE BEST TIME?

WHO PROTECTS THE DISENROLLED from the ABUSES of disenrollment? At Pechanga, their own hired expert confirmed that MY ancestor had more right of belong to Pechanga than ANY OTHER FAMILY.  Redding disenrolled their first chairman after restoration, Lorena Butler descendant Bob Foreman.  Chukchansi disenrolled 500, including their last language speaker
HONOR the ancestors FAWN, speak out for THEM.  Cast SHAME on your Vice President. Express your moral outrage, to YOUR OWN.
Posted by OPechanga at 2:51 PM

What does the NCAI even do? It is made up of the "Look at me, llok at me crowd"; amazing how loads of Tribal Leaders make up this crowd.