From the Press Enterprise.... 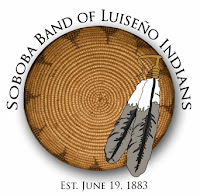 The Soboba tribe of Southern California claims the Riverside County sheriff violated its sovereignty, terrorized its people, falsely imprisoned its tribal council and coerced officials into handing over hundreds of hours of surveillance video while investigating a missing-person case.

Relying on two illegal search warrants, Sheriff Stanley Smith “deployed a SWAT team, helicopter, canine units, and countless … officers and vehicles, all for the purpose of downloading video surveillance and searching a single site on the reservation,” the tribe says in its federal complaint.

The four-day ordeal — involving “low-altitude hovering and flights over the Soboba Reservation by [a sheriff’s] helicopter” and “numerous vehicles and heavily armed officers” surrounding the administration building — “terrorized and intimidated the Soboba Reservation community, necessitated the closing of two nearby tribal schools,” the tribe says.
Posted by OPechanga at 10:29 AM