Another MAJOR EVENT for the NCAI (National Congress of American Indians) and another round of SILENCE by not discussing the corrupt and abusive actions of some tribes:  Pala, Pechanga, San Pasqual, Nooksack, Redding Rancheria, the Cherokee Freedmen issue to name a few. 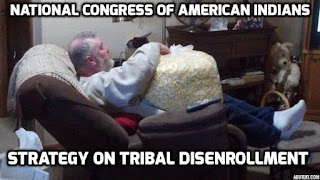 The NCAI  is alarmingly silent on the scourge of disenrollment that has ripped the hearts from Native People, much more than the moniker of a football team they railed against so vociferously.   Professor David Wilkins called them out...remember

REALLY, NCAI?   Have you called tribes who have disenrolled and spoke to them about the THOUSANDS of Native Americans who have had their heritage wiped away?    AT LEAST have the DISCUSSION, but alas, their AGENDA has no mention.....again

Learn More on Disenrollment, Ethnic Cleansing in Indian Gaming Country at these Links:

What is the purpose of the NCAI anyway? Besides catering to the "look at me look at me" crowd..? Another waste of money.