Don't look at me like that. He NAILED IT.  (blind squirrel....?) In today's speech on Cuba, in overturning the policy of former President Barack Obama he stated:

"We all accept that all nations have the right to chart their own paths.  I'm certainly a VERY big believer in that."
"So we will RESPECT Cuban Sovereinty, but we will never turn our backs on the Cuban people. That will NOT HAPPEN"

This is exactly what the TRIBAL NATIONS have done to the over 11,000 Native Americans who have been harmed by their OWN oppressive regimes.  AVOIDANCE has DONE NOTHING to protect the rights and resources of those of us harmed. 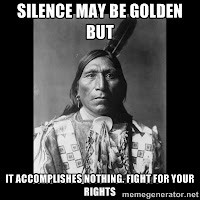 We've posted and re-posted what can be done to express MORAL OUTRAGE to a level that may change minds of those oppressive leaders and I wrote this to Sheryl Lightfoots piece:

Frankly, economic sanctions of another nation, plus public embarrassment may be the only course of action that is effective. For instance, in South Africa, it was their SOVEREIGN RIGHT as a free nation to impose apartheid on their country, yet, thankfully, at the urging of the Congressional Black Caucus, we stood up for black South Africans.

Posted by OPechanga at 2:23 PM