EPA COVER-UP in NAVAJO NATION MINE DISASTER: Blind Eye to the Truth

A lengthy article, albeit very short on it's impact on TRIBAL TERRITORY,  on some REAL COVER-UP activity, by the EPA in the Gold KING disaster in 2015... 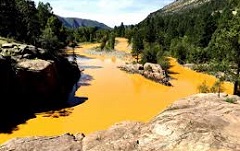 In August 2015, an EPA crew inexplicably dug out the rock and rubble “plug” to the long abandoned Gold King Mine, triggering a massive blowout that flooded the Animas River with 3 million gallons of acid mine drainage and, according to the EPA, over 550 tons of metals.

Had the EPA actually been doing what it claims it did, the disaster would never have happened. However, it seems the EPA could not allow its reputation to be tarnished with the truth.

The EPA has put forth the fiction that its crew had simply removed backfill that was blocking access to a mine tunnel, but did not disturb the natural plug that had formed in the tunnel’s opening that was holding back a sea of acid mine drainage.

The EPA claims its crew planned to wait for experts who would address the plug. It says its team was just further cleaning up the site when, through some inexplicable bad luck, the plug eroded, causing a blowout that turned the Animas River bright orange.


In essence, the agency wants us to believe that this was an accident that could have happened to anybody.


The truth the EPA is concealing is that its team did not stop after excavating to the tunnel’s opening, and never had any intention of stopping.


The EPA crew began removing the plug as it had planned, even though it anticipated acid mine drainage would flow out and that the drainage could be pressurized.


Numerous federal officials in and outside the EPA turned a blind eye to the truth, and never challenged the fiction that the EPA maintains to this day and that was just repeated Monday by the EPA’s inspector general.


For an agency more concerned about its own welfare than its environmental mission, the almost unfathomable incompetence is sufficient motive to cover up what really happened.

Posted by OPechanga at 4:34 PM