Lehman Brightman, Founder of United Native Americans, WALKS ON After a LIFETIME of Activism for NATIVE AMERICANS

Moving this story up, and wonder WHY Native Media hasn't taken notice and honored the life of Dr. Brightman?   Complete media silence.  I've sent emails notifying them, my wife has.  WTF?

Expected, but sad news that  Dr, Brightman has walked on.  Son, Quanah Parker Brightman shared to news on his Facebook page. 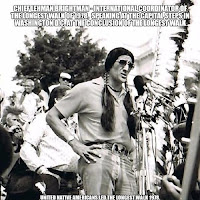 YOU can help with funeral expenses here
Lehman L. Brightman was a Sioux and Creek Indian who was born on the Cheyenne River Sioux Reservation in South Dakota. He was the father of three boys -- Lehman Jr., Gall , who preceded him in death and Quanah.

Professor Brightman was the founder and National President of United Native Americans, Inc. a non-profit Indian organization formed in 1968, to promote the progress and general welfare of American Indians.

He was a former football and track star at Oklahoma State University where is earned a B.A. Degree, he earned a M.A. Degree from the University of California at Berkeley. Mr. Brightman is a Marine and served one year in the Korean conflict where he was wounded in action.

He was a disinterested student going through the motions during high school and college in order to play football. However, when be joined the Marines, he found a renewed sense of purpose. "When I came back from the Marine Corps, I had straightened up," he says. "It taught me to be responsible.
Most people who served in the Marines are proud of it. Before the Marines, my life wasn't structured. I've lived my whole life since structured, and I learned that from the Corps." USMC, Korea 1951

He established and coordinated the FIRST Native American Studies Program in the United States at UC Berkeley in 1969, and taught at the University of California in San Diego, Sacramento State University, and Contra Costa College in San Pablo, California.

Dr. Brightman is the author of numerous articles on the history of Indian Education and federal boarding schools. He is the former editor of THE FIRST National Indian newspaper called Warpath, and was involved in the occupation of Alcatraz, and the Take-Over of Wounded Knee, and Led the Take-Over and Occupation of Mt. Rushmore in South Dakota in 1970. He was one of the national coordinators of the Longest Walk in 1978, and the Long Walk for Survival in 1980.

When it comes your time to die,
be not like those whose hearts are filled
with the fear of death,
so that when their time comes they weep
and pray for a little more time
to live their lives over again in a different way.
Sing your death song and
die like a hero going home.
Posted by OPechanga at 10:05 PM