Dakota Pipeline IS OKAY Says Disenrolling Tribes' Leaders' New Group S.P.I.T.W.A.D.: US is a SOVEREIGN NATION and We LOVE To Say SOVEREIGNTY

Wearing T-Shirts that proclaim SOVEREIGNTY is The Sweetest Word, leaders of disenolling tribes including Grand Ronde, Hopland, Nooksack, Pala, Redding, Chukchansi and Pechanga, STOOD with the U.S. Corp of Engineers in approval of the Dakota Access Pipeline. They shouted in unison SOVEREIGNTY!

The tribal chairman, who have sometimes been called LEADERS in mainstream media, which only cares about casinos, not rights, have formed a new group, S.P.I.T.W.A.D. (Sovereignty Promotes Illegal Tyrants & Whores Against Decency) 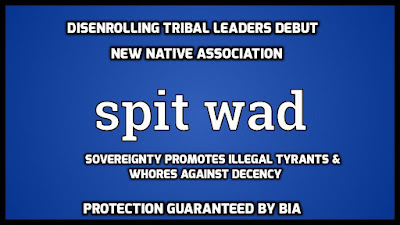 They think SOVEREIGNTY is the answer for everything that ails ya  S.P.I.T.W.A.D.'s main goal is to shout SOVEREIGNTY after each egregious act.

At a recent N.A.R.F. function, they were asked about Disenrollment, they shouted SOVEREIGNTY!

At a recent HOPLAND Marijuana Patch Weeding by the Mendocino Country Sheriff's Dept. chairwoman Iyesha "'Ere" Miller, when asked, "Hey, weren't those 847 plants a little more than for personal use, she shouted, SOVEREIGNTY!