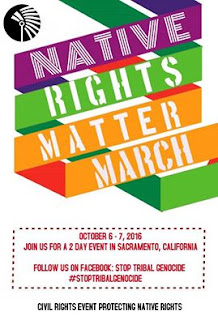 Join us for a 2 day event on October 6th & 7th in Sacramento CA to March for Native Rights at the BIA's front door. Disenrollment injustices and tribal council abuses are infecting Tribes across California in blatant fashion and the BIA has been turning their backs on the assimilation process.
Preserving the existence of our Tribes is our top priority and we are uniting to fight against all issues in Indian Country on Thursday, October 6-7, 2016. No more Tribal disenrollment, No more pipelines, No more fracking, No more treaty rights violations, no more identity theft, no more Columbus Day, no more mascots, no more police brutality. We are demanding the U.S. government and the Bureau of Indian Affairs to acknowledge their Federal trust responsibility that extends to the Native American communities.

The Native Rights Matter March is a civil rights event protecting the rights of Native Americans that have been violated by the Federal government, the Bureau of Indian Affairs and corrupt Tribal leaders and governments. We have struggled for centuries to protect our heritage and existence against the never ending threat of cultural genocide by the government and mainstream society. Our ancestors sacrificed a lot, even their lives, so that we could continue to exist. By allowing the continued genocide and rights violations of our people, our cultural preservation is not being honored, but rather being attacked and we are doing whatever we can to make sure that this atrocity to our sacred culture does not continue.
_________________

On Thursday, October 6th our speakers will focus on the following topics:

Tribal disenrollment:
Imagine having your citizenship taken away from you. That’s what happens when a member of a Tribe is disenrolled, or kicked out of their Tribe by their Tribal government, even if no criminal accusation was ever made. Throughout Indian Country, Tribal officials have been taking actions which have denied and/or stripped over 12,000 individual Natives of their citizenship rights and privileges as Tribal members and denied them Federal benefits and programs in the areas of housing, education, health, voting and public work assistance. In most cases, these tribal citizens have been stripped without due process. The U.S government, as a Federal trust responsibility, is supposed to protect the thousands of individuals whose rights have been infringed upon. Unfortunately, The Bureau of Indian Affairs has determined that their trust responsibility extends only to the Tribal Government and government officials and not the thousands of individual Native victims. In some cases, the illegal actions occurred decades ago, however, there has been a significant increase since Indian gaming has evolved into a multi-million-dollar business empire. Tribal disenrollment is a threat to our identity and cultural genocide to our future generations. There is no honor in taking away an individual or family’s cultural and spiritual heritage because of political corruption and greed.

HOLMES REPORT 14 AUG 2016 // 9:12PM GMT
Corporate People News In Brief (August 15, 2016)
WASHINGTON, DC—Revolution, the DC-based investment firm led by Steve Case, has hired Tracy Van Grack as its senior vice president of communications and public policy. Van Grack joins Revolution from the Brunswick, the global communications consultancy, where she was a director focused on corporate reputation, public affairs, and crisis management, primarily in the technology sector. Prior to Brunswick, she worked in the office of corporate engagement at Goldman Sachs.

WOOD DALE, IL—AAR, a global aerospace and defense contractor and provider of aviation services to airlines and governments, has named Marcus Jadotte as its vice president of public affairs. Jadotte, most recently an assistant secretary for the US Commerce Department, will establish an AAR office in Washington, DC, and be responsible for driving growth through strategic partnerships and alliances and deepening relationships with federal, state and local government officials.

TEMECULA, CA—Pechanga Resort & Casino has named Jessica Newton as its media and public relations specialist. Newton will be responsible for disseminating Pechanga news internally to team members and externally to members of the media, customers, visitors and residents in the Temecula Valley and surrounding areas.

killing off families, and destroying are heritage history,I'm a African American with Indian,Slavery roots, are life's matter, and its not fair to are children

SAN DIEGO,CA 92115
killing off families, and destroying are heritage history,I'm a African American with Indian,Slavery roots, are life's matter, and its not fair to are children