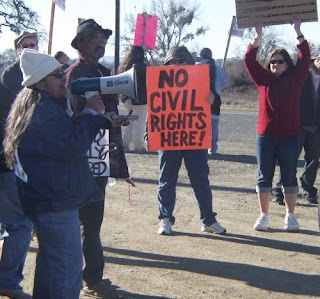 We need CHANGE in leadership in many of California Tribes.

Dozens of Robinson Rancheria tribal members those under threat of disenrollment and those who aren't as well as nontribal members lined a short stretch of Highway 20 near the tribe's casino on Saturday, protesting the tribal council's action to remove at least 60 people from its rolls and to fire numerous people from jobs with the tribe.

That disenrollment action was followed earlier this month by sudden firings for disenrollees and nontribal members working at California Tribal TANF, which offers social services to Indians, and the tribe's well-respected environmental program.

Indian and non-Indians alike carried signs that read, Corruption spoken here, Can you smell the greed, Justice for who? All, Did our ancestors die for injustice, All tribes united to fight tribal corruption, Honk for justice and Fairness and quality for all RR (Robinson Rancheria) Pomos.

About 50 people were engaged in the protest at any one time, with many people coming and going over five and a half hours. Drivers of dozens of cars honked and waved to the group.

Wanda Quitiquit, one of those targeted for disenrollment and a member of the American Indian Rights and Resources Organization (AIRRO), credited AIRRO which cosponsored the protest with being the only group to actively fight for Indian civil rights.
“I'm not disenrolled as far as I'm concerned, said Quitiquit, who called California the home of disenrollment.

She said AIRRO estimates that 3,000 California Indians have been disenrolled from their tribes. There is something very bad going on in Indian land today.

Posted by OPechanga at 9:06 AM

CONGRATULATIONS TO ALL WHO WHERE THERE.
It is good to know that there is at least on newspaper in this state who prints this kind of news.
The Riverside Press Enterprise should take a lesson from other News Papers.
As an Indian and an AIRRO member
i support their cause as much as i support those caught up in the Pechanga moratorium.
EVIL DEEDS COMMITTED IN DAYLIGHT BY CORRUPT INDIAN PEOPLE.