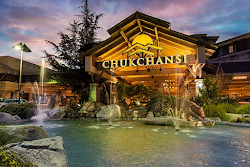 ROB CAPRICCIOSO  has an excellent article on the resurgence of the Picayune Rancheria of Chukchansi Indians, a despicable tribe in the central Valley of California.  The PRCI are one of the most egregious disenrolling tribes of this century.

My hero, Cathy Cory, whom I've been honored to work with, and protest with over the past decade and a half is featured prominently on the disenrollment issue with the tribe.   Thank you Rob, for getting that information out there in TRIBAL BUSINESS NEWS

Cathy Cory, who along with her four children (one of whom was a minor at the time) was disenrolled from the tribe in 2006, is appreciative of the work Gonzales has done so far on the contentious disenrollment issue, especially compared to previous leaders who kept removing more and more members.

“She is a very strong woman, and has been able to stand in the face of much adversity within the tribe to bring things forward and hold her clear position on no further disenrollment at Picayune, and in growing the tribe,” Cory said. “For that, she deserves much credit.

“She is not in an easy place, either as a female in Indian Country leadership in general, and specifically in her position as tribal chair at Picayune, which has the dubious distinction of being constantly in disarray.”

Cory estimates that the tribe under the current leadership has brought back approximately 150 to 200 citizens who were disenrolled immediately before the major tribal infighting of 2014 that preceded the casino closure. But tribal citizens disenrolled in 1999 and 2006-2007 have not been allowed to re-enroll, she said, and she would like the current council to take that up.

Congratulations to the tribe for making a comeback, but until they do the HONORABLE think, and bring all their people home, I'll keep bringing the issue up.