Tribal Disenrollment at REDDING RANCHERIA, The Protest Still Goes ON

On June 19, Redding Rancheria honored its Original Distributees to the rancheria, which included Virginia Timmons, on whose property the Win River Casino stands. 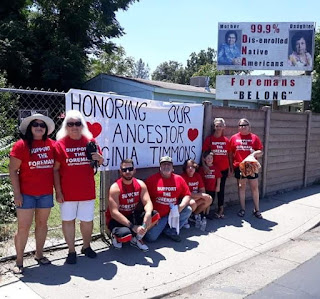 Virgina Timmons' disenrolled  attended in protest. As we have reported many times, in 2003, Timmons' remains were exhumed for DNA testing along with her daughter , Lorena, who was among the 130 original members enrolled in the tribal group after its reestablishment 24 years after the tribe's termination, a restoration that came about partly through the efforts of her grandson, Bob Foreman.

The requred DNA testing proved her descendants belonged. They were disenrolled anyway. Why? 99.9 wasn't good enough?  NOPE The family was disenrolled in 2004 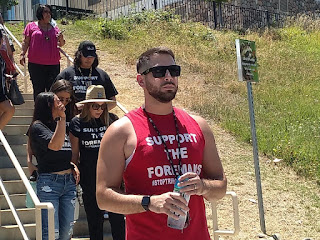 NEVER GIVE UP.  Cameron Foreman got now Interior Secretary Deb Haaland on record about disenrollment and has drawn many to the cause with his relentless efforts on social media.   THAT's how to honor our disenrolled ancestors, by fighting HARD FOR THEM

Posted by OPechanga at 5:47 PM